Movie Review: ‘The Night House’ might creep you out 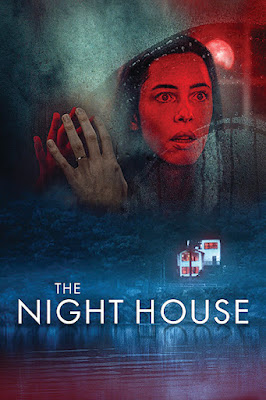 How well do you really know the people you think you know? A disturbing thought. Beth returns home from her husband Owen’s funeral, after he committed suicide. In her grief, she notices a few unusual things happen in their house. Are these things real or is it something else? This movie caught me off guard in several places and was a good scare, especially with Halloween just days away.

“The Night House” starts in a very dark place but took me on an emotional ride where I wasn’t sure what to think or what was actually occurring. This movie stars Rebecca Hall, Sarah Goldberg, Vondie Curtis-Hall, Evan Jonigket, Stacy Martin, and Samantha Buck.

Beth (Hall) is understandably shaken up and despondent after the death of her husband. Once she returns home, she notices the gate to her dock is open; she closes it and later on notices it’s open, again.

Later that night, Beth has a weird dream … or was it a dream? It seems so real to her that she goes searching for clues in Owen’s (Jonigket) phone. What she finds only opens the door to more questions. Her friend, Claire (Goldberg) tells her everyone has secrets though Beth insists she and Owen did not.

More weird things happen. Beth searches into what she thinks may have been one of Owen’s secrets. She makes a discovery or two and things complicated.

One afternoon, Beth is walking in the woods and runs into her neighbor Mel (Curtis-Hall). He tells her she’s not in her right mind. I’m still not 100 percent sure if he was right. After she questions him intensely, Mel admits a few things to Beth. Here she finds out more about Owen’s alleged secrets.

Beth digs more and the situation only spirals. What was Owen up to?

Beth visits a bookstore where she meets Madelyne (Martin) who sheds more light on who Owen really was. Despite it taking a real toll on her mental state, Beth continues to look for more information, against Claire’s advice.

What she finds was confusing, exciting, mildly horrifying and satisfying all wrapped up into one.

I had zero expectations going in. I had seen several ads and it look like a decent thriller/horror movie. This movie has what I would call the rollercoaster effect; it’s a little slow to start. As I was climbing to the top, the first few events happen to Beth, before a sharp drop and a fast ride with my heart pumping and I felt nervous in several places along the way. I was creeped out in a couple spots. I also tried the entire time to figure out what was really happening but could not until the very end – and I’m still unsure if I was actually correct.

A minor spoiler alert: the ending left me with questions, but overall, I enjoyed this movie and would recommend it. Two stereo systems up.

Movie Review: What to watch during the scariest time of year

It’s the most wonderful time of the year. Halloween is coming right up. In the past I’ve recommended some of what I considered ‘the best of the best’ for scary movies. This year, I thought I’d take a different route and list some deeper cuts from a variety of streaming services to give you a fright, or a chuckle during this festive season. 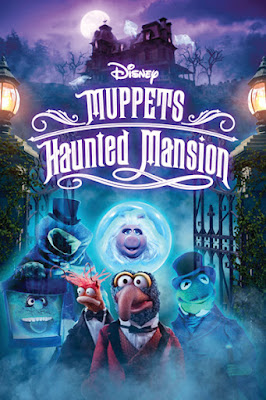 After Father Peter (Guy Pearce) is part of an exorcism gone wrong, he tells his protégé Father Daniel (Vadhir Derbez) he has a score to settle. When the two go to a house where a boy murdered his family, it’s up to Father Daniel to handle this exorcism. Can he save this boy from demonic possession?

This has a strong start and keeps the story gripping until the end. It has many of the things you would expect from a movie about an exorcism: levitation, flickering lights and demonic voices. It is slightly gruesome in parts. Two thumbs up.

This is a series from the British Broadcasting Company. When Alison (Charlotte Ritchie) inherits a mansion, Button House, she and her husband, Mike (Kiell Smith-Bynoe) discover there are a variety of ghosts that have lived there for years. And only Alison can see them. There are many, but just a few ghosts include: a caveman, a scoutmaster and a politician.

This is a very funny show with three seasons currently available and an Americanized version currently airing on CBS. There’s no blood or guts or frightening scenes. Just goofy ghosts trying to interact and appeal to the living. Highly recommended.

When Gonzo gets the opportunity to spend the night in a haunted mansion on the 100th anniversary of the disappearance of magician The Great MacGuffin, he jumps at that chance. He brings his friend Pepe the Prawn along. This was funny from the start, and as Pepe would say has many “famous peoples” in it. Many of the Muppets in the mansion are trapped by fear and Gonzo must discover and then conquer his fear in order to escape – and make sure he has Pepe with him when he leaves.

I think kids and adults can enjoy this, though as the Muppets go, it’s a little darker with scarier Muppets and could be frightful to younger viewers. However, I found this to be a lot of fun. Two busts of Pat Sajak up!

The Manor (Not Rated) Amazon Prime

A lot of this movie might seem like a sad story of a woman being forced to live in a home against her will, but it’s more than that. It took me to a place I never saw coming.

When Judith (Barbara Hershey) moves into an assisted living facility, she expects something is up from the beginning. Her roommate asks her if she sees him; this is concerning. Judith keeps seeing a man, or figure, but is told – by the manor – this is because she has Parkinson’s Dementia. Things get even weirder, and Judith tries to convince her grandson (Nicholas Alexander) the staff is in on it. Just wait until the end.

Disney/Pixar has done it again. “Luca” is an underwater adventure that takes you to the surface with two friends who discover that taking a chance is worth it in the long run. When sea monsters Luca and Alberto risk being discovered when they take a trip to Human Town, also known as Portorosso, they meet Giulia and the three show each other friendship comes in all shapes, sizes and species. 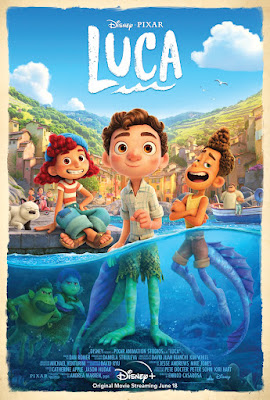 When Luca and Alberto are away from water, they become human – they only turn into sea monsters if they get wet. The three team up to win the Portorosso Race, a traditional Italian triathlon consisting of swimming, bike riding and eating pasta. Winning won’t be easy as Ercole Visconti has won six years in a row.

In the town of Portorosso on the Italian Riveria, many of its residents have heard lore of seas monsters inhabiting the water. Two fishermen sit in a boat, and one asks the other if they really need to fish near the island.

“What if the stories are true?” he says.

The other fisherman tells him those are just stories to keep them from getting a really good fishing spot. They throw their net and all of a sudden, they catch something. They see a fin and then a tail. There is a sea monster caught in the net. He breaks free, but many items from the boat fall to the bottom of the sea.

Luca (Tremblay) finds an alarm clock and a playing card. He fears land monsters (humans) when he sees the underside of a boat. Luca quickly daydreams of going above the water. Luca’s mother (Rudolph) has instilled quite a fear in him to stay away from land monsters.

“We do not talk, think, discuss or go anywhere near the surface,” she tells him.

Luca wonders what lies above the water’s edge.

His wonder overpowers his fear when he meets Alberto (Grazer) who shows Luca there is a lot of life above the surface. Alberto introduces him to the Vespa and Luca is instantly hooked to life on land.

When they travel to Portorosso and meet Giulia (Berman), the three decide to enter a triathlon and aim to beat town bully and reigning champ, Ercole (Raimondo).

Along the way, it gets harder and harder for Luca and Alberto to hide the fact that they are sea monsters.

Meanwhile, Luca’s parents have entered Portorosso to bring him back to live with his uncle (Cohen).

This movie is filled with optimism. Luca is very timid and afraid to try new things, and his friend Alberto tells him you can silence that voice in your head – a Bruno – that tells you you can’t do stuff by simply saying “silenzio Bruno!”

“Luca” stresses the themes of friendship, family, trust and conquering fear. Sometimes you just need a little push. A fin and a thumb up!

Available to watch on Disney+. <