Movie Review: “Standing Up, Falling Down” 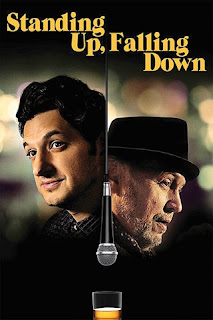 A down-on-his-luck 30 something and a stuck-in-a-rut 60 something form an unlikely friendship.

We meet Scott (Ben Schwartz) who has just moved back home after four years in L.A. trying to make it as a standup comedian. While at a club he literally bumps into Marty (Billy Crystal) as Marty stumbles into the bathroom. Marty is a dermatologist and notices a rash on Scott’s arm. He tells Scott to come see him and the diagnosis is rash caused by stress. There are several factors in Scott’s life that could contribute to this rash; his family, a former girlfriend who still lives in the area, his career, living with his parents, etc.

Scott runs into Marty again, and the more they get to know each other, the more they slowly become friends. One night, Scott and Marty are talking, and Scott tells Marty he thought he would have things figured out by now. Marty tells him no one has it all figured out and everyone moves at their own speed. Marty has a non-existent relationship with his son and it’s very apparent that Marty is lonely. We later find out more about Marty’s life, but I don’t want to give anything away; however, this is where the movie takes a bit of a darker, more serious turn.

Scott and his dad have somewhat of a hard relationship. His dad thinks Scott should get a “real” job and give up on “this standup comedy nonsense”.

Scott runs into a former girlfriend, Becky (Eloise Mumford). After seeing her, he is convinced she is not happy, and wants a second chance to maybe be with her again...although she’s married.
Scott continues doing comedy at a well-known local club and has a very good set, getting lots of compliments from the audience; even Becky, who texts him, suggesting the get together sometime.
Meanwhile, Marty is having a hard time and goes to reconcile with his son Adam (Nate Corddry).
Scott gets together with Becky and they begin to talk about the past...and the possible future.

Will the two achieve the outcomes they both want and be able to find some kind of happiness?

Definitely worth the rental; this movie starts out funny and becomes somewhat of an emotional roller coaster. After learning that Marty has led a hard life and that Scott has a myriad of feelings regarding Becky and their past as well as general uncertainty toward the future, what started out as a friendship, takes a bit of a twist.

This movie has several life lessons: everyone struggles, no one has it completely figured out, life throws you curveballs, etc. Towards the end, this comedy is a bit of a tearjerker. It makes you laugh right up to the final seconds though. And has a nice twist that fulfills some advice Marty gave to Scott, “Lightning rarely strikes twice, but if you keep your eyes open...it can strike again.” Two thumbs up.

Posted by The Windham Eagle at 2:47 PM