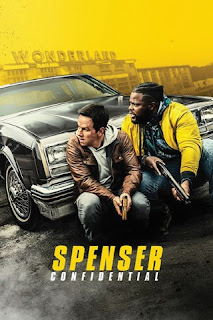 A police officer, Spenser (Mark Wahlberg) who lost his cool and pleaded guilty to assault is about to get out of prison, after spending five years behind bars. In the beginning of the movie he is seen in the prison library quietly reading. He is approached by Squeeb (Austin Post a.k.a. Post Malone) and soon, three other large guys enter the library. They tell Spenser he needs to leave Boston, once released. The five then get into a big fight and Spenser does his best to defend himself.

Now out of prison, he meets Henry (Alan Arkin), a longtime friend who lets him stay at his place where Spenser also meets Hawk (Winston Duke), who is also staying with Henry. He reconnects with his girlfriend Cissy (Iliza Shlesinger) and they have a somewhat complicated relationship.

A police officer, Terrence (Brandon Scales) has been killed and some other bad things happen. Despite no longer being on the force, Spenser wants to get right down to how and why this happened and bring justice to the officier’s wife, Letitia (Hope Olaidé Wilson).

As Spenser tries to prove Terrence’s innocence, he and Hawk become friends. The two trace down a car spotted on a convenience store security cam the night Terrence was killed. They track down the guy and follow him.

Later, Spenser visits Squeeb in prison and Squeeb gives Spenser one tip: look into a place called Wonderland. Spenser talks with former crime reporter, Cosgrove (Marc Maron) after he learns Wonderland is a soon-to-be-built casino that may not be ‘on the level.

Letitia comes home one night to find her place completely trashed. Spenser really wants to know: Why this happened? Who might have done it? And what were they looking for?
Do Spenser and Hawk find the answers to these questions? This weekend might be a good time to watch the movie and find out.

Overall, this wasn’t a bad movie. A Mark Wahlberg movie set in Boston where he seeks justice isn’t the most original plot, though there was a lot of decent fight scenes. I did find it drag in parts and I felt like it was about 20-30 minutes too long. Iliza Shlesinger was one of my favorite parts of this movie; she was very funny. There is a great action scene at the end, that makes the slowness of the movie worth the wait. If you can’t find anything else to watch, this is, at the very least, entertaining.