Like any good music snob, I’m hesitant to let myself enjoy something that sounds too poppy. I’ve had my fair share of guilty pleasure moments when I hear a snippet of top-40 ear candy in public, but they have always felt more guilty than pleasurable. I would never admit that I secretly enjoy it when my dorky college buddy puts “Never Getting Back Together” by Taylor Swift on at his backyard barbecue. Like ever. But all of that changed this month when one of my favorite music snob approved musicians, Claire Boucher, aka Grimes, put out an undeniably poppy album called “Art Angels.” 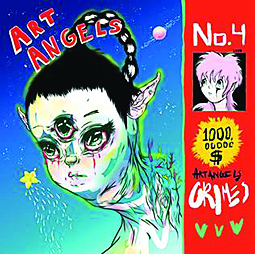 If you listen to “Visions,” Boucher’s 2012 breakout album, and “Art Angels” back to back, her transition into mainstream pop contender sounds seamless; it wasn’t. Boucher’s first flirtation with mainstream pop came when she wrote “Go,” which was intended to be a single for Rihanna. “Go” ended up in pop purgatory after being dismissed by Rihanna’s camp for not being poppy enough and condemned by Grimes fans for being too poppy. Wounded, Boucher decided to scrap the entire album she was working on, but not before sharing a demo called “Realiti.” It was perhaps the catchiest song she had ever released, and fans loved it. The same Internet trolls who bullied Boucher into tossing out an entire album claimed that “Realiti” was the best Grimes song to date.

Which brings us to “Art Angels,” an album that flaunts its pop sensibilities with a pride that’s contagious in its listeners. Even me. The beauty of the album is that it’s accessible without sacrificing any of Boucher’s experimental leanings. One “Art Angels” standout is the bubbly “Butterfly,” which brings to mind Mariah Carey’s album of the same name. Another is “Scream,” which features Taiwanese rap verses from Aristophanes and, you guessed it, lots of screaming. The album is at its best when its artistic and angelic sides are working in tandem. An example is “Kill v. Maim,” where the cheerleader chant of a chorus simultaneously satirizes gender norms and makes you want to dance. It remains to be seen whether “Art Angels” will actually earn Grimes success among the masses, but on a personal level, it has helped me come to grips with something I’ve been denying my entire life. My name is Ryan Lowell and I’m a pop music fan.

Posted by Michelle Libby at 7:45 PM