It takes almost two full hours to get there, but when we reach the location for which Bridge of Spies is named, it’s well worth the wait. Cinematic master Steven Spielberg directs Tom Hanks in this Cold War tale, one of espionage, redemption, and good faith in humanity.  Hanks stars as James Donovan, an attorney—later becoming a lesser-known figure in America’s history—who is tasked with representing a captured Soviet spy when no one else in his firm will step up to the challenge. Donovan believes that in America, everyone should get a fair shake.


Actor Mark Ryalance, known well in the world of stage acting but not so familiar on screen, portrays Soviet spy Rudolf Able. His Rudolf Able enables us to sympathize with the man and his dilemma, and, even more importantly, he helps to guide the audience into James Donovan’s shoes. 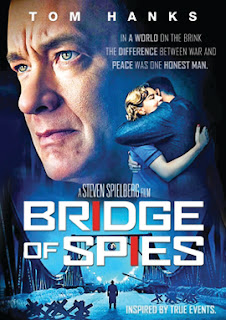 We understand that Able worked for the enemy, but it’s impossible to ignore the fact that he was also human. Audience members who know a bit about the Cold War might recall American pilot Francis Gary Powers, shot down while running surveillance during a flight through Soviet Union airspace. Powers was unable to initiate the self-destruct mechanism on his plane and ended up as a prisoner of war. While James Donovan and Rudolf Able’s relationship create a bulk of the Bridge of Spies story, Gary Powers still plays a pivotal role in the course of action; upon imprisonment, Powers becomes a bargaining chip between the United States and the Soviet Union.

With James Donovan’s sharp legal skills, and armed with a full heart, the talks between countries begin and the audience is thrust into a conflict with multiple lives on the line. Bridge of Spies is a film that manages to keep audiences in its grip without running along at a breakneck pace.

I hadn’t realized it until the closing credits rolled, but a hallmark of a good film (at least one based on history) is enticing your audience to learn more about the subject matter after said film is over. I have no shame in saying that I ordered not one but two books about The Cold War as soon as I arrived home from the theater. As someone of a young(-er, -ish) generation, I was never taught much, nor heard much, about the Cold War.

Bridge of Spies succeeds most in providing both entertainment and education to someone in my shoes, while also appealing to an older crowd who is more familiar with this moment in our past.
Posted by Michelle Libby at 7:43 PM