Well, the whole idea/concept of a hiking journey through the Appalachian Trail starring Robert Redford and Nick Nolte sounds extremely promising for anybody who shares a fondness for film and the outdoors. Even though it may not have achieved the high status one who expect of that combination, the good moments shine throughout thanks to gorgeous cinematography by John Bailey and strong performances by Redford and Nolte. 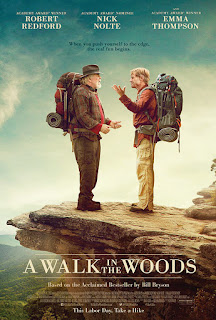 The film’s plot revolves around two estranged friends who decide to hike the Appalachian Trail together, despite their age and physical abilities. Redford plays Bill Bryson, a successful writer who returns to America after spending 20 years in Britain, who finds himself adrift in his sudden realization of his old age and nostalgia for the days of traveling and exploring.

After a walk in his backyard one day to a trailhead, Bryson decides to hike the entire length of the Appalachian Trail and contacts all his close friends in hopes they would join him. The only one to accept is Nick Nolte’s character Stephen Katz.

Nolte shines in his performance as Katz by bringing his rugged and shaky voice and profane remarks to the table, but is able to showcase his drama acting chops in the more tender moments of the movie.
The golden moments of the film proved to be the comedic ones thanks to near perfect chemistry between the two lead actors.

So all-in-all, Director Ken Kwapis (The Office) manages to balance and combine drama and comedy into an amiable and light atmosphere punctuated by Nathan Larson’s peaceful and mellow soundtrack which helped to increase the sense of vast wilderness as the two trek along the mountains.
Posted by Michelle Libby at 6:00 PM No comments:


Gunpoint is a game created by Suspicious Developments. Gunpoint is found on the Steam website, which is a digital distribution service where you can buy games and software.

In Gunpoint you play as Richard Conway a freelance spy who is out for hire. He has to first clear his name from a murder he was framed for and get revenge on who framed him.


It is a stealth, puzzle, platformer game. The game revolves around stealth game play, where you can both avoid being spotted and complete the mission completely undetected, or you can leap out of the shadows and knock out guards. 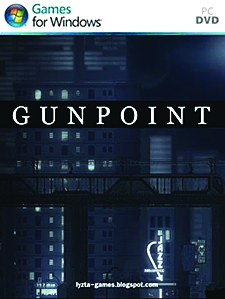 The puzzle portion comes in with the use of the game’s hacking mechanics to get past guards. The hacking element allows you to hack anything from the lights to guard's guns and alarms. It's a platformer because you have a pair of Bullfrog Hypertrousers that allow you to jump very high and scale buildings.

There are many ways of getting around each level and completing the objectives. One of the problems with the game is the short campaign. There are not that many story missions, but this is solved by the Steam Workshop. It also has Steam Workshop support so you can create your own levels and share them with other people. You can also play other people's levels.   The game features an upgrade system to make it so you can make each level different from your first play through and can change how each level is completed.  The game is very fun and I like it a lot. The game is $10 on Steam, and because it has a short campaign, I would recommend waiting for a sale to get it.
Posted by Michelle Libby at 5:18 PM No comments:

Straight Outta Compton is a new biographical film directed by F. Gary Gray. The movie tells the story of the rap group known as N.W.A. and includes former members Ice Cube and Dr. Dre amongst the producers of the film. Starring in the movie are, O'Shea Jackson, Jr., Corey Hawkins, Jason Mitchell, Neil Brown Jr., Aldis Hodge and Paul Giamatti. As a pretty big fan of the hip hop genre, I was looking forward to seeing this flick, but my expectations weren’t exactly all that high to say the least. In the end, I had a blast with Straight Outta Compton, and it may very well be the surprise hit of the summer blockbuster season.

The film begins in the year 1986, primarily set in what is perhaps the most dangerous city in the country; Compton, California. A group of five friends, including Ice Cube (Jackson Jr.), Dr. Dre (Hawkins), Eazy-E (Mitchell), DJ Yella (Brown Jr.) and MC Ren (Hodge) form N.W.A. under the label of Ruthless Records. Following the early success of their debut single, an agent named Jerry Heller (Giamitti) is hired as the group’s manager and they are subsequently picked up by Priority Records. The majority of the film then covers the rise and fall of this influential group as they use their powerful music to change hip hop forever.

Overall, the rather lengthy run time of this film had me entertained from start to finish. The first thing that stood out was how incredibly realistic these seemingly unknown actors looked as they were portraying these distinct cultural icons. Towards the end of the film, I was practically convinced that I was watching Ice Cube himself on the screen and not O’Shea Jackson. Building off that, I thought that every member of the cast did an exceptional job acting, especially Paul Giamitti in his crucial supporting role. Furthermore, there were more than a few intense moments that were honestly pretty moving. As far as the music goes, you could tell that a lot of the lyrics were simply voiced over, but somehow they still made it work quite effectively. I also enjoyed the style the movie was shot in and liked the entertaining pace that it had. As long as you can get past some of the rather extreme content that comes with this type of film, Straight Outta Compton shouldn't be missed.
Posted by Michelle Libby at 5:38 PM No comments: