Southpaw is a new sports drama starring Jake Gyllenhaal, Forest Whittaker, Rachel McAdams, Oona Laurence and Curtis “50 Cent” Jackson. In my opinion, boxing has been the most successful sport to bring to the big screen (Rocky, Raging Bull, The Fighter, etc.) so for that reason alone, I was looking forward to this movie. Add the factor of Jake Gyllenhaal in the lead role, and I really couldn’t wait to see this. Gyllenhaal is one of my favorite actors working in Hollywood today and I really think that he is one of the most underappreciated as well. From his early work in Donnie Darko to his Oscar-snubbed performances in Prisoners and Nightcrawler, this guy is one of the best in the business. 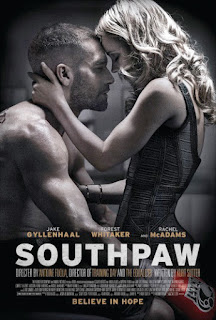 Billy Hope (Gyllenhaal) is an undefeated championship boxer living with his wife Maureen (McAdams) and their daughter Leila (Laurence). Not too long after he wins the World Light Heavyweight Championship, tragedy strikes and Billy Hope’s life begins spiraling out of control. He soon turns to drug and alcohol abuse as he seems to lose everything he has. Now, Hope seeks the help of a veteran boxing trainer and gym owner named Titus “Tick” Willis (Whittaker) in order to get his life, as well as his career back on track.

Southpaw is a very emotionally powerful film that was truly far more intense than I anticipated. This is largely due to what is yet another Oscar-worthy performance from lead actor Jake Gyllenhall. His physical and psychological transformation shined bright in this movie and this is certainly some of his best work to date. It still blows my mind that he wasn’t nominated for last year’s Nightcrawler (Netflix users, check it out), but maybe the Academy will get it right this time, giving him some well-earned recognition. Having said that, the rest of the cast was on their A-game as well, and I must say that this is overall, the best acted film I have seen this year. Furthermore, the boxing scenes were brutally realistic and incredibly entertaining. I suppose you could say that this movie’s one minor issue is the “boxing movie clichés” that it has, but everyone involved did such an incredible job and the film was so powerful that it really wasn’t a problem for me. I highly recommend Sotuhpaw if you are prepared for an emotionally intense movie that is easily one of the best films of 2015. iusHis
Posted by Michelle Libby at 10:05 AM