Mission: Impossible- Rogue Nation is a new action movie and the fifth installment in the Mission: Impossible film franchise that began with the 1996 original. Christopher McQuarrie directs this time around, while Tom Cruise once again stars in the lead role. The rest of the supporting cast includes: Jeremy Renner, Simon Pegg, Rebecca Ferguson and Ving Rhames. Overall, I wouldn’t consider myself a huge fan of the Mission: Impossible franchise, but I do believe that the series has gotten increasingly better and 2011’s Ghost Protocol actually stands out as one of my favorite action movies. This blockbuster franchise has definitely benefited from having a different director for every movie, as it makes each film feel fresh and original.  Having said that, I was really looking forward to this movie and hoping that upward trend of the series would continue. 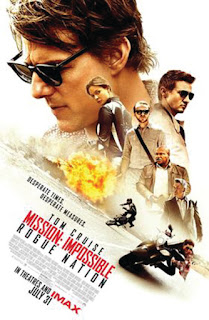 Following a plane heist that opens the movie, IMF agent Ethan Hunt (Tom Cruise) is determined to prove the existence of an international criminal organization known as the Syndicate. Essentially, the Syndicate operates as anti-IMF, as they are on the same elite skill level and are committed to destroy the IMF no matter the cost. Now it is up to Ethan Hunt and the rest of his team to come together once more in order to bring down the Syndicate organization, in what has been deemed as their most impossible mission to date.

Right from the thrilling opening scene to the end credits, I had a great time with this movie. As expected from any summer blockbuster, there were plenty of action scenes, but each and every one of them was exceptionally filmed and incredibly entertaining. There was one particular motorcycle sequence that is easily one of the best chase scenes I’ve watched in years. Furthermore, the acting was great across the board and Simon Pegg offered some perfect comic relief with his character.

Also, say what you will about Tom Cruise, but the guy is one of the most committed actors in Hollywood and it shows yet again with all of his own impressive stuntwork. If I had one problem with this movie, which really goes for all of the series, it is the lack of a strong villain. Putting that one complaint aside, I had a blast watching Rogue Nation, and it is an excellent action movie that is certainly one of the strongest in the Mission: Impossible franchise.