Fantastic Four (aka Fant4stic) is a new superhero movie and ironically enough, the fourth live action film adaption of the popular, same named superhero team from Marvel comics. The movie is directed by Josh Trank and features a talented, young cast of Miles Teller, Michael B. Jordan, Kate Mara, Jamie Bell and Toby Kebbell. I never got a chance to check out the unreleased 1994 film titled The Fantastic Four, or 2007s Rise of the Silver Surfer, but I have seen the 2005 movie. Honestly, I must say that the 2005 Fantastic Four film is one of the worst comic book movies I have ever seen and this new reboot surprised me in the sense that I truly didn’t think that the franchise could get any worse. 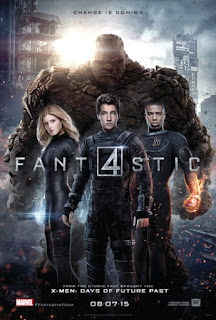 Early on in this movie, five young scientists work together on a project to create a teleporting machine that will take them to an alternate universe. Following a freak accident on a newly found planet, they soon gain unique powers while one of them is left stranded. Reed Richards (Teller) can stretch his body into unreal shapes. Johnny Storm (Jordan) gains the ability to shoot fireballs and fly. Sue Storm (Mara) can become invisible and create force-fields. Ben Grimm (Bell) has transformed into a stone-bodied superhuman. Together, these four must team up to save Earth from Victor Von Doom (Kebbell), who was left behind in the accident and is now ready to abuse his own powers.

Put aside the comic book genre for a moment, this new Fantastic Four movie is one of the worst films I have ever seen. I look for a summer superhero movie like this to entertain me on some level, and this movie utterly failed to do that. Everyone involved just seemed so uninterested and bland, starting with the four title heroes that we as an audience are supposed to connect with. That is a sad thing to say, especially for a guy like Miles Teller, who blew it out of the park with his performance in 2014s Whiplash. Ultimately, this disaster of a film is the opposite of fantastic as they couldn’t even pull off decent visual effects with their $122 million budget. Furthermore, the storyline was just plain boring and spent far too much time building up to absolutely nothing. If you’re making a trip to movies soon, stay away from “Fant4stic”; it is pure garbage.