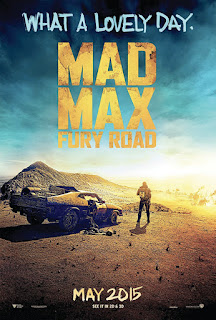 Mad Max: Fury Road is a new post-apocalyptic action movie and the fourth installment in the Mad Max franchise, coming 30 years after the previous film. George Miller directs once more, while Tom Hardy (Inception, Warrior, The Dark Knight Rises) replaces Mel Gibson in the title role, starring alongside Charlize Theron and Nicholas Hoult. I actually never had a chance to see the first three Mel Gibson movies from the late 70s and early 80s, so heading into the theater, this was my first experience with the beloved series. Having said that, the trailers alone made this movie come off as a total action fest, filled with chase scenes, explosions, and above all, chaos. Mad Max: Fury Road was absolutely crazy and a complete blast of an action film that came exactly as advertised.

This post-apocalyptic thriller throws the audience right in the middle of a world that apparently became a completely barren desert wasteland, where all sense of humanity seems to be lost. Although absolutely bizarre, the premise of this film is pretty simple, as “Mad” Max Rockatnsky (Tom Hardy), a damaged man of few words, must team up with Furiosa (Charlize Theron), a woman driven by her loyalty to her female companions. Together, they look to return to Furiosa’s homeland with water and life. However, that requires traveling through the desert on the deadly “Fury Road”, all while being chased down by a countless number of ruthlessly insane warriors.

Right from the start of this movie, you feel as if you are losing your mind, and that does not change throughout the entire two-hour runtime. I cannot stress enough how downright crazy this movie is, and believe me anyone who has seen this would say the same. Everything about the setting, to the completely bizarre characters that live in it, is just totally nuts. Having said that, once you settle into the wild environment, this is an absolute blast of a movie. The film is essentially a two hour chase scene that somehow manages to never lose a bit of our interest. The action sequences are brutal and absolutely thrilling, loaded with breathtaking visuals and plenty of explosions. Furthermore, I am a huge Tom Hardy fan, and I thought he owned every scene in the iconic title role. Overall, Mad Max: Fury Road  is an unbelievably entertaining summer action flick that is truly insane.
Posted by Michelle Libby at 5:25 PM