It is without argument that Stephen King is the King of modern fiction. In over 50 novels, he has terrified readers with eerie story lines and authentic wit. Classics like ‘Salem’s Lot, Misery, and Carrie certify him as the champion of horror, but recently his book themes have hinted to a new direction of content. Some people are skeptic to the progression, others enjoy them more than his older works. Mr. Mercedes 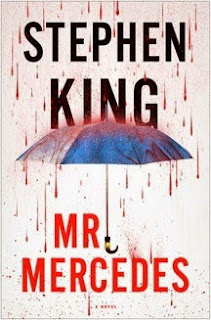 is proof of change in Mr. King’s catalog. But did it live up to its diﬀerence? In Mr. Mercedes, the book starts oﬀ with a job fair in an unknown Ohio city. It is almost four in the morning, and the line of unemployed-hopefuls had escalated from dozens to hundreds. Out of the mist, a Mercedes-Benz speed up and runs over the crowd of people, injuring and killing dozens. The reader later learns the sedan was stolen from the owner, Olivia Trelawney, who most likely left her keys in the car. After the Mercedes sped oﬀ into the morning mist, the car was then found abandoned with the killer’s mask— bleached to terminate DNA traces— in the passenger’s seat.

K. Bill Hodges is a retired detective in the unknown Ohio city. Since his retirement, he has barely left his house, watches a fair share of daytime television, and occasionally ponders on eating his own pistol. It wasn't until one day he realizes that perhaps he hadn’t reached his last case, when he receives an anonymous  letter from “THE MERCEDES KILLER.” The letter was from the person who injured and killed the people at the job fair with the stolen Mercedes two years prior, and was laced with daunting confessions and unnerving, erotic fantasies. In his letter, Mr. Mercedes invites Hodges to Under Debbie’s Blue Umbrella, an anonymous European chat site where he gives the detective hints of his next attack. After unveiling more and more information about the case, Hodges teams up with his African-American neighbor, Jerome, and a mentally-challenged women, Holly, to pursue the Mercedes killer and stop his next attack.

Throughout the novel, the reader gets perspectives from both Bill Hodges, retired detective, and Brady Hartsfield, the Mercedes killer (not a spoiler, he is introduced very early in the story). King blends these two very fluently, creating a cohesive, free-flowing plot.

When I sat down to read King’s Mr. Mercedes, I thought I knew what to expect. Stephen King has been commonly known for having marshmallowy middle portions of his books— where he rambles on about unnecessary facts and ideas for long periods of time (see his novel, Needful Things). While he recently has done a better job at improving this issue, it still occasionally pops up in his books. In Mr. Mercedes, he did not have this issue in the slightest. To my surprise, it did not read like a King book, either. The novel, unlike some of his other works, is written, for the most part, in the present tense. Stephen King did an excellent job of finding a balance between plot, dialogue and back-story.

And, without spoiling the fun, the story of retired Det. Bill Hodges shows hint of continuation— which is great news for Stephen King fans over the world.
Posted by Michelle Libby at 11:13 PM