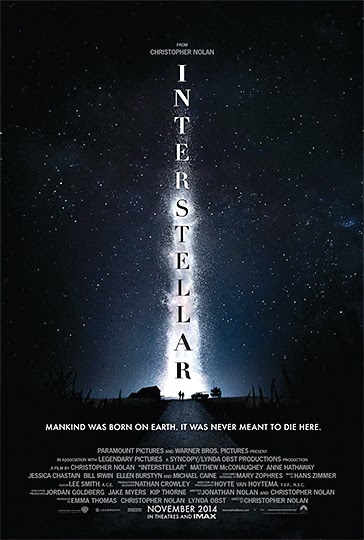 Interstellar is a new science fiction movie from critically acclaimed director Christopher Nolan (The Dark Knight Trilogy, Inception, The Prestige, Memento). The film has an extremely impressive cast featuring Academy Award winners Matthew McConaughey, Anne Hathaway and Michael Caine as well as Oscar nominee Jessica Chastain. Largely due to the people involved in the production, Interstellar was one of my most highly anticipated movies of 2014. I am an enormous fan of Christopher Nolan’s work and I just couldn't wait to see what he would do with his next ambitious project. I wouldn't say that Interstellar is my favorite Nolan film, however that is hardly disappointing as I still think it is one of the better science fiction movies of recent memory.

Interstellar portrays a very near, dark future in which our planet has been devastated by extreme drought and famine. The human race faces extinction due to major food shortages and drastic climate changes. Now, a group of explorers must use a newly discovered wormhole in order to travel beyond our solar system, searching for another planet capable of sustaining life. One of these explorers is a widowed astronaut named Cooper (Matthew McConaughey), a former NASA test pilot/engineer turned farmer who lives with his father-in-law and two children. Due to the complications of the space time continuum, Cooper is faced with the seemingly impossible decision of seeing his children again or saving the future existence of the human race.

Anybody familiar with Christopher Nolan’s work knows that his films can oftentimes be very confusing. His 2000 thriller Memento is literally a storyline told in reverse order and 2010’s Inception wanders seamlessly through multiple layers of dreams within the subconscious. For better or worse, Interstellar is quite similar to those movies in the sense that the story is a little difficult to follow at times and some of the unique ideas in it can be hard to wrap your head around. That being said, I still think that
Interstellar is an excellent, epic film. In my opinion, the effects are just as remarkable as the breathtaking visuals in last year’s Gravity, however the story is much improved. Furthermore, the acting is outstanding across the board and Matthew McConaughey is brilliant in another Oscar-worthy performance. Overall, Interstellar is one of 2014’s best films and another gem on Christopher Nolan’s flawless track record as a director.
Posted by Michelle Libby at 11:20 PM