Movie Review: The Wolf of Wall STreet - By Heath Chase


So, with the year all wrapped up, it's safe to say that we got a decent selection of films to sink our teeth into throughout the past 365 days. One of which came out six days before it all ended, one that's going to be talked about for a while. “The Wolf of Wall Street” shoved its foot in the door and declared itself to be heard, and now that I've heard what it had to say it is clear to me that it was worth stopping in for.


Directed by the highly acclaimed Martin Scorsese, “The Wolf of Wall Street” tells a true story of a man who reached the top and then lost it all. In many ways the film reminded me of the tale of “Scarface”--well, without the guns--and that truly is a compliment. The film follows a charismatic and intelligent stockbroker named Jordan Belfort who is played expertly by Leonardo DiCaprio. When the film first opens in 1987, we see Belfort as a young and eager man who wants none other than to live big. I'll skip over the statistical standpoint of the film's plot and just say that Belfort really learns how to wedge himself into the stock market--in 'somewhat' illegal matters--and expand and create a multimillion dollar business of greed and power. 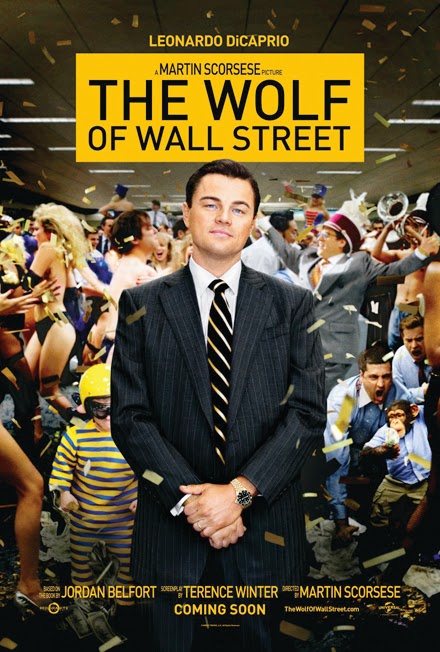 The best part about this movie was watching a man climb to the top, holding more money than he knew what to do with and then crash. That's really all it's about...except it's three hours long. Length isn't a severe issue with the movie, but, if I find myself checking the time in any movie--which I did do with this one--then there is obviously something keeping it from being completely gripping at every moment. What there was no failure in, though, was the film's cast. Leonardo DiCaprio pulled of being the center of attention flawlessly while carrying out the superb writing and its many jokes along with him. Also, Jonah Hill as his hilarious and colorful right hand man made an excellent addition to the overall vibe of the film.

No matter which way you look at it, the film is going to get Oscar buzz, and in my opinion it is worthy of it. The film was smart, well written, and most importantly interesting, deeming itself to be another classic by the man himself, Martin Scorsese.
Posted by Michelle Libby at 10:59 AM