“Paranormal Activity: The Marked Ones” is the fifth chapter in the extremely popular and incredibly profitable supernatural horror film series. Even though it takes place after the events of “Paranormal Activity 4”, the subtitle of this movie goes to show that it is really more of a spinoff than a sequel. I loved the original film released in 2009, but the way I see it, the quality of the movies in this franchise steadily declined as the series continued. Unfortunately, this pattern is maintained with the release of yet another film in this seemingly never-ending saga.

“The Marked Ones” is centered on Jesse and Hector, two Latino teenagers living in Oxnard, California. Early on in the film at Jesse’s high school graduation party, the two use Hector’s new camera to investigate the mysterious death of their creepy neighbor, Anna. It doesn’t take them too long to discover that she was a witch as they find many items related to black magic and witchcraft while searching her house.

When he wakes up the next morning, Jesse notices a large bite mark on his arm that looks like it came from some sort of animal. Suddenly, he has new supernatural abilities including inhumane strength and levitation skills. Despite how ridiculous it seemed, it was fairly entertaining to watch Jesse use his powers to pull off amazing tricks on his skateboard and even throw his enemies through the air like he was some sort of superhero. As time goes on, Jesse becomes even more powerful and dangerous, posing a potential threat to his friends and family. 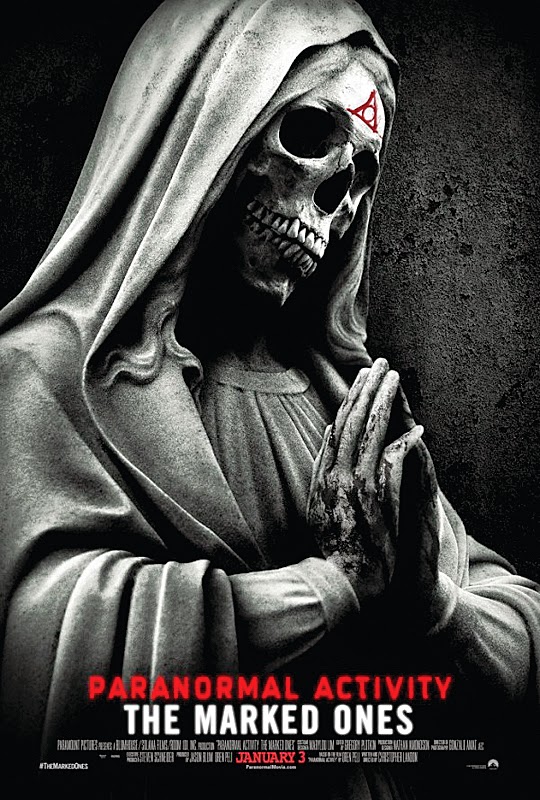 “The Marked Ones” may be the most action packed film of the franchise, but it truly lacked the creepy factor of the earliest installments. The climax of this movie was basically an extended sequence of extremely predictable jump scares. In contrast, what I loved most about the first “Paranormal Activity” was the fact that it scared me far beyond the actual viewing of the movie. Despite its insanely low budget and simple special effects, the film stuck with me and made it incredibly difficult to fall asleep at night. “The Marked Ones” completely failed to do that; by the time I got home from the theater, I could hardly remember what I just saw. Don’t be expecting much more than some jump scares and a few good laughs from what is yet another forgettable “Paranormal Activity” movie.

Posted by Michelle Libby at 2:39 PM