On Saturday afternoon, I ventured into Smitty’s Cinema for a viewing of “Lone Survivor”, which is the biopic story of Marcus Luttrell’s team from Navy SEAL Team 10 and their harrowing tale of Operation Red Wings. The movie, directed by Peter Berg, is adapted from Luttrell’s “Lone Survivor” memoir, which was co-authored by Patrick Robinson. 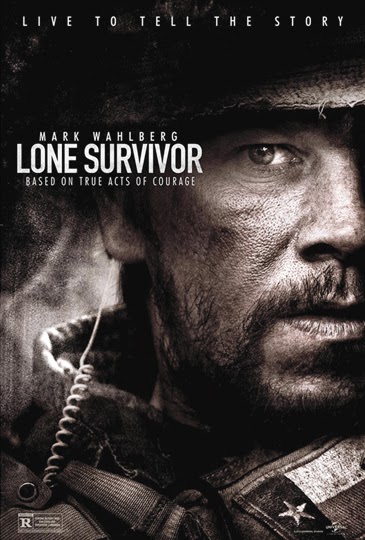 The movie begins with a gaggle of Navy SEALs all hanging around, waiting for their next mission. It is here that we see that not only are these men warriors, but they are also human, with families, girlfriends, and a penchant for teasing the new guy on the team. Within a few minutes, the team is notified that Luttrell, portrayed by (Marky) Mark Wahlberg, LT Michael Murphy (Taylor Kitsch), PO2 Danny Dietz (Emile Hirsch), and PO2 Matthew “Axe” Axelson (Ben Foster) are going to be sent out into the mountains of Afghanistan to search for a suspected Taliban leader Ahmad Shah.

After being dropped off via helicopter, the men navigate the treacherous terrain until they eventually arrive at a spot in which they can view their target. Their problems begin when they have difficulty establishing contact with their headquarters. They are then discovered by a group of goat herders that is sympathetic to the Taliban fighters at the bottom of the hillside. They capture the herders, only to argue over what should be done with them given their situation. LT Murphy makes the command decision to let them go and to retreat back to an area where their radio and satellite phone may work. Before they can make it away, however, a large group of Taliban fighters find them and pin the SEALs down before they can communicate their position.

From this event, Dietz, Axelson, and Luttrell were all awarded the Navy Cross, the Navy’s second highest award for valor. Dietz and Axelson’s awards were posthumous, as both men were killed in the assault. LT Michael Murphy was awarded the Congressional Medal of Honor for his bravery that day, as he knowingly sacrificed his life by placing himself in an open position, exposed to the enemy, to make the call to higher command.

Following the deaths of his teammates, Luttrell, although terribly wounded, managed to make it to a point where peaceful villagers saved and protected him from the Taliban until United States forces rescued him.
This movie is, hands down, the best war movie since “Saving Private Ryan”. Personally, I can’t imagine how someone could live through such an event. Luttrell put it all out there for the common man to see, as if to say, “See, America? This is the type of stuff the military contends with!” I was fortunate enough during my service that I never had to go through any sort of ordeal like the SEALs of Operation Red Wings. I have seen the aftermath of the battles in war, however, and it is hell. There is no glamorization of war in this movie.

The movie is rated R for language and violence. I almost brought my 14-year-old daughter to see this with me, but afterwards, I was glad I didn’t. Some kids can handle the type of brutal violence that this movie contains, but most can’t. This is a movie based on real events and sticks close enough to the story that Luttrell himself makes an appearance at the beginning of the film.