Recent to come out on DVD is a film called “Killing Them Softly,” starring Brad Pitt.  This is a film that I wish I had caught on the big screen, but better late than never.  The film is based on a novel titled, “Cogan’s Trade,” by George V. Higgins and is one that I highly recommend. Higgins’ story was captured very well and the noire feeling of the crime underworld comes to life. Our main character is Jackie Cogan (Pitt), a hitman for the mob who is sent in to eliminate two amateur thugs after they hold up a mafia regulated card game. As Higgins does in many of his other stories, it sounds a lot easier than it turns out and the film is filled with black comedy through its bleak characters’ screw-ups. Alongside Pitt are a variety of well-known actors like, Richard Jenkins, James Gandolfini and Ray Liotta, just to name a few.
This was a film that had me on the edge of my seat, deeply involved in the film’s well written dialogue (which makes up a good 70 percent of the film) and artistic grittiness. On the other hand, it is completely fair to say that this film could have you snoring by the end, it all depends on your taste. In the end, I’m going to say this was a great film with superb acting and storytelling and it breathes realism into a very real thing known as crime.
Posted by Niels Mank at 2:01 PM No comments:

Heath goes to the movies "The Great Gatsby" by Heath Chase

If there was a film I was looking forward to more than any other film in this first half of the year, it would be “The Great Gatsby.” Having just read F. Scott Fitzgerald’s highly acclaimed novel for my college literature class—and being a huge fan I might add—this was an adaptation I had to see. I will minimize my biased opinion between the literature and film as much as possible, but I will say that the film did not beat my original readings experience. By no means does this mean that the film was a failure in delivering the classic novel’s charm and voice, because it did. Maybe in time I will think otherwise, for this film is far different than any film I have seen before.

Our film is told through the eyes of Nick Carraway (Toby Maguire), a bonds salesman in Long Island New York during Prohibition. Nick finds himself in a part of town where his neighbor’s homes tower over his small unappreciated cottage, one of these homes belong to Jay Gatsby (Leonardo DiCaprio). Gatsby is a man of wealth and charm beyond belief and quickly befriends his new neighbor Nick. Through the film we see Gatsby—who appeared to be a stable and powerful figure—unfold into a human desperately longing for something untold. Daisy Buchannan (Carey Mulligan) is just that something. And through love triangles and betrayals we have “The Great Gatsby,” one of the biggest hallmarks of a story in American history.

Baz Luhrmann transforms the 1920s into a vivid, colorful, and loud world bumping with 2013’s pop culture and music and I found myself overwhelmed with this imaginary figment of how life could have been. This director likes to change reality into something completely different and original and I simply loved what he did with the time period, but I can understand if it appears bizarre to some. Visually the film is flawless, everything shines and sparkles and the modern soundtrack, featuring Jay-Z, Beyonce, and other thriving pop stars, make their way into the world of “The Great Gatsby” and the thing is…it all works.
The film is without a doubt worth the watch, the acting is exceptional with DiCaprio and Joel Edgerton standing out among the others, breathing vast life into already lively characters. Although fans of the original “realism” of the novel might be taken aback, I assure that by the closing of the film you will be adjusted to the rampant nature of the film that is Baz Luhrmann.
Posted by Niels Mank at 1:14 PM No comments:

Heath goes to the movies "Home Run" by Heath Chase

Family “sit-down” movies are growing sparser and sparser as time goes on and “Home Run” was an excellent refreshment in the film industry. This is a story of man’s darkest times and how we get through them. This is also the story of God’s intervention in each and every one of our lives. This was not a film made for entertainment purposes alone; this was made to send a message, and what a message it sends.

Home Run follows a professional baseball player named Cory Brand who is at an all-time high in his career, but there is something wrong deep down inside of him. In the film’s intro we see Cory violently storm off the field due to a bad call in a game, and his secret becomes evident. Instead of a bottle of water, Cory keeps a bottle of vodka. This alcohol addiction has been haunting him behind the scenes of his success and with unjust actions on and off the field, Cory finds himself suspended from the team. It is during this time where we see the changes in a man with so much potential finding a new path through life.

The film is very realistic, and while I can safely say I do not drink, the steps Cory goes through can be relatable in some way for all of us. While many things strive in the film, it does struggle with pace. There were too many times where I felt emotion was being forced onto me, and there were many scenes that felt repetitive. For example, Cory will get back on track, then he’ll blow up and cause havoc. So on and so forth. Now I’m sure this is a common trait in one’s actions through rehabilitation, but when watching it in a movie, it kind of dubs down the experience. Acting wise, the film does its job, but it was rough in parts; this is mainly due to a few of the children actors (which I will say, good children actors are hard to come by).

Overall, the film is worth the watch. I think it’s impossible to not learn a thing or two from this films powerful message and you might shed a tear. Go into it not expecting a Hollywood blockbuster. Go into it expecting a powerful journey filled with love and friendship, for this movie demonstrates everything you will ever need.
Posted by Niels Mank at 10:14 AM No comments: 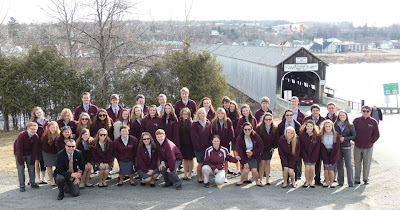 The Windham Chamber Singers have recently returned from their annual spring tour which included stops throughout New Brunswick and Prince Edward Island.  Each year the choir tours the Northeast presenting school workshops, assemblies and public concerts.  The choir gave a total of 10 performances over the six-day trip that took place during April vacation.

In addition to performing, the choir also raised over $5,000 for different charitable organizations including the Alzheimer's Society, the Summerside Food Bank, the Miramchi Folk Festival and Camp Centennial in Moncton, NB.

I’m going to spoil this review right off the bat and say that this is my kind of film and is the best film I’ve seen since “Cloud Atlas” last fall. Don’t let the long title fool you, “The Place Beyond The Pines” is a serious crime drama packed with extremely stressful moments and twists that you will not see coming. My jaw hit the ground not once, but twice during the amazing twists that are woven into the film, and with that the writing is nearly flawless.

The story circles around a motorcycle stunt driver named Luke Glanton (Ryan Gosling), who works for a traveling fair. After he finds out a woman he once had relations with (Eva Mendez) is mothering his child in the town, he decides to stay and be the father he was meant to be. With no money to support his new family, he decides to take up bank robbing and is quickly distinguished as, “The Moto Bandit.” I will say no more, for this is a film that should be gone into with a completely open mind which is clearly what the director wanted.

The best thing I can say about this film is that I completely fell in love with its characters. Gosling is outstanding as Luke Glanton and although his methods of obtaining money are incredibly wrong, it is extremely evident that he is doing it for the love of his new family and I rooted for him the whole way through. Bradley Cooper co-stars in the film as well and this is the best performance I’ve seen from him to date. He plays a rookie cop who is just touching his feet to the ground in a world where crime is more present than ever before and I found that everything he did is what I would do.

This is the kind of movie I hope to see be nominated for something next Oscar season, it is just that good. Fantastic writing, a great story and excellent acting to hold it all together. So, go to the place beyond the pines and see one of the most original films of the past few years.
Posted by Niels Mank at 10:24 PM No comments: