End 2022 or start 2023 with this action-packed, sweet movie the entire family can enjoy. 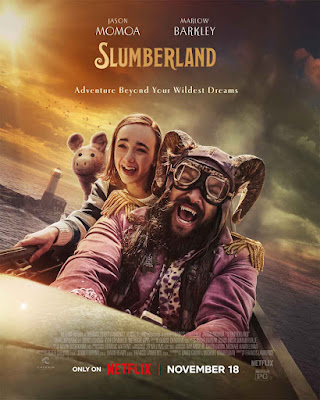 Your dreams don’t just happen – there is an entire team in Slumberland that can make them happen.

After Nemo experiences a devasting loss, she checks out, disengages with the world, and wants to be left alone ... except when she’s in Slumberland, only reachable through sleep. In Slumberland, anything is possible with the help of her friend Flip. When the Dream Police begin chasing the two, they have to find a way to escape safely. And Nemo needs to find the joy that life has to offer.

Nemo (Barkley) and her dad Peter (Chandler) live in a lighthouse. They work during the day and tell stories at night. The two are very close. Peter tells Nemo when she can answer the question “what is a lighthouse for?” she can have the keys to it.

During a horrible storm, Peter is lost at sea. Nemo goes to live with her estranged uncle, Philip (O’Dowd). Philip is closed off and keeps very much to himself; he and Nemo don’t really connect at first.

Then, in her dreams, Nemo meets Flip (Momoa) in Slumberland. Nemo would really like to see her dad again. Flip says they can go on a treasure hunt and asks her for a map, which she does not have. She wakes up.

She finds the map and returns to Slumberland where she and Flip go on a treasure hunt for a pearl. Nemo finds out Flip and Peter were friends, and they spent a lot of time in Slumberland. In Slumberland, you can do anything your heart desires – dancing, dump truck driving, you name it. But there are things to watch out for.

Agent Green (Opia) of the Dream Police is also looking for this treasure map.

Bad things happen and chaos ensues. Nemo is having a nightmare and eventually wakes up. She continues to struggle with the outside world and wants to remain isolated. Unfortunately, Philip is little help. He tells her to not shut herself off from the world; life is what happens when you’re awake.

Back in Slumberland, Flip would also like to see Peter, but is being pursued by the Dream Police.

Flip and Nemo become a team, but the Dream Police catch up to them and Flip is arrested.

Nemo wants a dream with her dad, but that’s not how Slumberland works.

Philip reveals how much he used to look up to his brother and you learn he has a connection to Flip.

Nemo returns to Slumberland and busts Flip out of jail.

Meanwhile, she and Philip have a fight and Nemo leaves, putting herself in real danger in order to get back to Slumberland.

This movie is visually stunning with incredible special effects that envelop the entire screen. I found it a little slow in parts – but overall, good. It’s a heartfelt, fun movie with a nice message about living life to the fullest. “Slumberland” is good, but not great. Still worth a watch.

One plush pig up.

Available on Netflix. <
Posted by Ed Pierce at 2:00 AM No comments:

HBO Max’s “A Christmas Story Christmas” hands down a winner

The bunny suit. The leg lamp. The bar of soap. That mean Santa. And of course, the famous BB gun. It’s the 1940s and “A Christmas Story” is a tradition every holiday season. 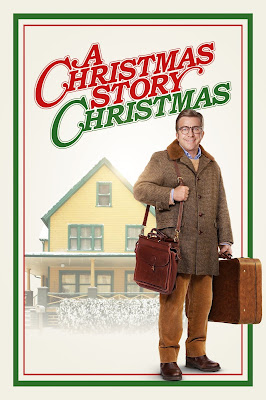 Now, it’s the 1970s and Ralphie Parker is now grown up with a wife and family of his own. When his dad unexpectedly passes away right before Christmas, Ralphie returns home to make sure his mom and family have the kind of Christmas his dad used to give Ralphie and his brother when they were little, but there are a few hiccups along the way.

This nostalgic movie was fun and put me in the spirit of the holidays. It features many from the original cast and several callbacks to the original movie.

Life moves fast – one minute you’re playing kick the can with kids named Flick and Schwartz and the next minute you’re paying taxes and pulling out gray hairs. Ralphie Parker (Billingsley) is writing the great American novel and has until the end of the year to find a publisher or he’s returning to the rat race and giving up on writing.

He’s excited to start celebrating Christmas as his parents are coming in two days.

When he gets a call that his dad has died, Ralphie and his family return to his old home in Indiana on Cleveland Street; his mother wants him to make a great Christmas, just like “The Old Man” used to do every year. Ralphie has to pull it off to honor his dad.

Ralphie’s children Julie (Layne) and Mark (Drosche) run into some bullies who are very similar to the ones who used to pick on Ralphie.

He meets his old friends Flick (Schwartz) and Schwartz (Robb) at a bar. They help him brainstorm ideas for the perfect family Christmas – kind of.

On top of all this, his mom wants him to write his dad’s obituary.

On a trip to the department store Higbee’s, Ralphie and his wife, Sandy (Hayes) manages to get everything they need to give the family a perfect Christmas.

After a snowball fight lands Julie in the hospital, with an eye injury of all things, the gifts are stolen from Ralphie’s car.

He must now use the most delicate of parental maneuvers: the lowering of expectations. However, Ralphie won’t give up on a perfect Christmas.

I’m not the biggest fan of “A Christmas Story,” but after seeing this third installment I gave the original another try – it’s not bad, but I found this version more fun.

“A Christmas Story Christmas” is an excellent movie. It’s full of Christmas cheer, is family oriented and will put you in the mood for the holiday. It has a nice message reminding us of what the season is really about, and that it can be filled with a few surprises, when you least expect it.

Available on HBO Max. <
Posted by Ed Pierce at 2:00 AM No comments:

I need to give fair warning about Apple TV+’s new movie “Spirited.” It is a musical and I wasn’t crazy about that either, but I promise this one is worth it. 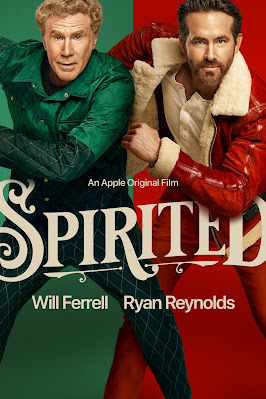 The story of Charles Dickens’s “A Christmas Carol” is a must around this time of year. What if it were told from a different perspective, in a different way? The Ghost of Christmas Present wants to turn the life of nasty guy Clint around while at the same time establishing a life for himself – past Ghosthood.

The Ghost of Christmas Present (Ferrell) and his co-workers are in the business of change.

We meet Karen (Byrne), who is having a tough time with the possibility of her future. She is relieved to find out there is still time to change her wicked and awful ways. After which it is revealed that she has officially changed.

There is a dedicated staff, run by Jacob Marley (Page), who work hard to make sure these odious individuals change their ways. They haunt someone, change them, and then sing about it.

He is described as a combination of Mussolini and Ryan Seacrest. Marley objects to trying to change Clint because he has been deemed unredeemable. However, after some begging and probably singing, Marley says yes, and the ghosts get to work on figuring out how to change this unpleasant man.

Clint’s assistant, Kimberley (Spencer), is unhappy with the work she does and thinks she is a terrible person. The Ghost of Christmas Present thinks otherwise and may have a tiny crush on her.

Marley visits Clint, but it doesn’t go as it usually does in the famed ghost story. Marley gets frustrated and leaves. Marley classifies Clint as a Level 20 pain in the butt.

And now Clint’s hauntings begin. However, the ghosts don’t behave as you might think they would, and The Ghost of Christmas Past’s visit has some adult themes.

Clint had a hard life as a child which may be the reason – not an excuse – for the way he is today.

The Ghost of Christmas Present then has to step in. During a particularly hard key life moment, Clint manages to escape seeing this uncomfortable moment from his past; a moment that could lead to Clint becoming a better person.

Ferrell and Reynolds are great together. I signed up for Apple TV+ just to watch this and I do not regret it. It was less than seeing it in the theater. It’s funny and has an important message about doing good in the world. One small act of kindness can have a ripple or even a wave effect and who knows how far and how many people that can reach?