It’s officially the scariest time of the year! What better way to begin the Halloween movie season then with a sequel to a classic. 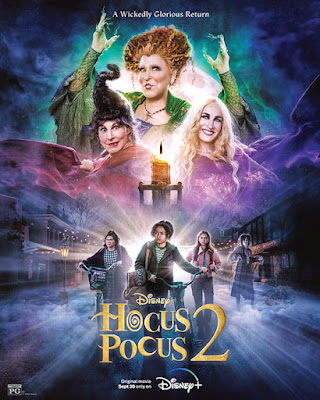 The Sanderson Sisters return to Salem to try once again to gain immortality, and this time a new group of kids will maybe thwart these witches. Are the sisters just as powerful as they used to be? Is this as much fun as the original? Or maybe a bit of a letdown?

It’s 1653 in Salem and a young Winifred Sanderson (Henderson) is very upset because it’s her 16th birthday and she doesn’t want to marry the Reverend she’s committed to. The actresses who play the Sanderson sisters (Kitchen and Brener) give incredible performances. Henderson especially has Winifred’s cadence, facial expressions and movements down.

The Reverend banishes them from Salem, but they escape to the Forbidden Wood where they meet The Witch Mother (Waddingham) who tells them one day Salem will belong to Witches and gives Winifred Book.

It's Halloween, current day and is Becca’s (Peak) birthday. She and her best friend Izzy (Esccobedo) have plans for a sleepover. They wish their friend Cassie (Buckingham) would hang out with them, but things have changed since she got a boyfriend.

When Becca and Izzy light the candle, lightning strikes and the Sanderson Sisters return. The girls trick the sisters and take them to a modern apothecary where they run amok.

Later you find out Gilbert tricked Becca because he is the Sanderson Sisters’ biggest fan. The sisters throw Izzy and Becca in a “dungeon” under Gilbert’s shop.

Winnie who wants to be the most powerful witch on Earth will perform the Magicae Maxima spell to achieve this – a spell The Witch Mother said must never be performed.

Gilbert must gather the ingredients for the spell or be killed. He digs up Billy Butcherson (Jones). The two team up to get back at Winifred.

Mayor Trask (Hale) is in danger because he is a descendant of the Reverend. Becca and Izzy warn Cassie of this and trick the Sanderson Sisters again.

Gilbert may have been a little untruthful. Once the sisters do escape from being tricked, they steal Cassie. They plan to perform Magicae Maxima and then torture her.

Ever since I was a kid, I’ve loved the original “Hocus Pocus.” So, when I found out the Sanderson Sisters were returning to Salem 29 years later, I set my expectations high ... too high.

Let me start off by saying this is a good sequel. It is not a great sequel though. It’s fun and there are many callbacks and flashbacks to the original. It has a lot of physical comedy and some great gags.

Mary Sanderson rides a couple of Roombas – or Broomies through the air – and the Sanderson Sisters even interact with Amazon’s Alexa. I wish the story had continued with Allison, Max and Dani though Billy was in it. While this sequel does not hold a Black Flame Candle to the original, it’s still hauntingly good fun.