Written and directed by B.J. Novak, “Vengeance” is the story of a writer who travels to Texas to solve the death of a woman he had been seeing casually. What he finds is a shock to him and her family. 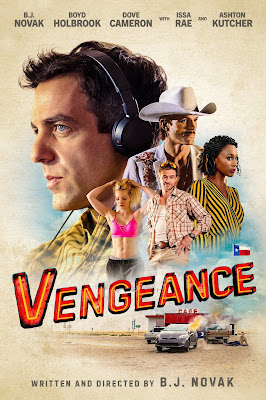 Ben Manalowitz (Novak) is a writer for The New Yorker and wants to tell a story people will connect with; his producer, Eliose (Rae) wants to help him do it.

When Ben gets a call from a grief-stricken family after the death of their daughter Abilene (Tipton) from an opioid overdose, they are convinced she and Ben were close, when really, they were barely acquaintances. They insist he fly to Texas and attend her funeral.

Her brother Ty (Holbrook) thinks she was murdered, and he and Ben are going to avenge her. Ben says as a personal boundary, he doesn’t avenge deaths, his life is not a Liam Neeson movie. Ty says being in Texas could be a good story. Eliose agrees and Ben flies down.

There is no actual proof of a murder, just theories because the truth might be too hard to accept.

Ben creates the podcast “Dead White Girl” and will record interviews with friends, family, and members of the community to try to get to the bottom of what might have really happened.

He goes to a recording studio where Abilene recorded a song and meets with Quentin Sellers (Kutcher) who, I found interesting initially. At one point Ben asks what advice Quentin would give and he tells him to just listen and repeat what you hear back.

The family gets very comfortable with Ben while he is staying with them. They are learning from him, and he is certainly learning from them.

This movie has funny moments, like when Ben visits a rodeo, tries a deep-fried Twinkie, and gets caught Shazaming “Deep in the Heart of Texas.” There is also some darker, more subtle humor.

As soon as Ben begins to make progress, something happens. His producer says they have enough for the podcast and tells him to come back. He chooses to stay and that’s when the real truths come out.

With a movie title like “Vengeance” you would think there would be action and maybe some violence. There is very little of that. This is a satirical fish out of water revenge movie but is more satire than revenge. This movie has more heart than action – and that’s not a bad thing.

As you get further and further along in Ben’s podcast, I found it very interesting, and it is definitely something that I might listen to in my long list of podcasts.

My fault with this movie lies in the ending. I liked it but think it could have been done differently.

This is absolutely worth seeing or renting, but I only give it one podcast microphone up.

Streaming on NBC’s Peacock and available to rent. <
Posted by Ed Pierce at 2:00 AM