What starts in an incredibly emotional and heart-breaking place, does eventually ease up and become a less intense movie about a teenager, Nate, who weeks before he was to head off to college contracts meningitis and goes through a harrowing life-change that takes a toll on himself and his family. 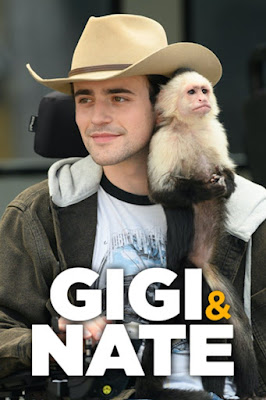 To help Nate who has become paralyzed, his family gets a service animal, a Capuchin monkey name Gigi, to help him. It starts off nice and very effective for Nate, but a run-in with an animal activist group puts the fate of Gigi’s companionship and service to Nate in jeopardy.

Intended to be a feel-good movie, and it is in spots, the ending leaves much to be desired and glosses over what could have been a more satisfying conclusion against the movie’s antagonist.

Nate (Rowe) goes off with some friends on the Fourth of July and meets Lori (Colletti). They all go out on a boat for some tubing. Later, Nate jumps from a cliff into the water. Initially, he seems fine, but later complains of a headache.

After their dinner gets rained on, Nate is found throwing up and is having trouble breathing. He is rushed to the hospital where it is discovered his brain is swelling. He is airlifted to another hospital closer to where his family lives.

Nate is understandably angry and depressed and even attempts to kill himself.

Claire requests a service animal and that’s when Nate meets Capuchin monkey Gigi. It’s a rocky start with the possibility of returning Gigi discussed by Claire and Dan.

After Gigi observes Nate’s day-to-day routine for a while, she eventually figures out how to help him. One such instance is when she lifts his fingers up so he can grip a ball during a therapy session.

While the two are in the grocery store one day Nate runs into Lori, who invites him to a party.

Nate also runs into Chloe Gaines (White) who says the monkey is a public health issue, and they need to leave the supermarket. This interaction later leads to protests and a hearing to decide if the state of Tennessee will ban Capuchin monkeys as service animals. Nate testifies and tells the committee Gigi is not a screen he stares at or a robot he orders around and that he wouldn’t be here if it wasn’t for Gigi.

Loosely based on real-life events, I thought this would be a feel-good, cheery movie. It has its moments, but overall, I say this is sub-par at best. The first 15 to 20 minutes are stressful. What followed did not have me leaving the theater feeling uplifted, but kind of let down. The solution to the problem that arises misses an opportunity for another victory for this guy whose life is tough enough. Wait until this comes to streaming if you really want to see it.

Now playing only in theaters. <
Posted by Ed Pierce at 2:12 AM