A disoriented man hanging out of a cargo plane, cargo falling out the back of the plane, several henchmen and a very expensive car. “Uncharted” opens in mid-air and from its start is a non-stop thrill ride. It’s fun, funny and a good time for viewers. Get the cat and gather round for a tale of mystery and adventure. 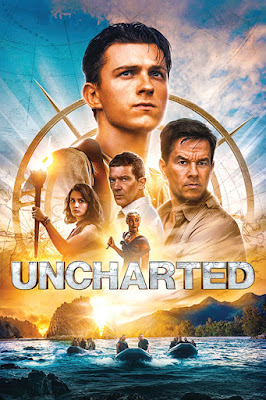 Some 15 years prior to the disoriented man, Nate (Holland) falling from the cargo plane, he and his brother, Sam (Pankow) are getting into some trouble. And since this is the third strike for Sam, he’s being kicked out of the orphanage they reside in. Nate hasn’t seen Sam since.

New York: present day. Nate is a bartender with an extracurricular activity. He runs into Victor Sullivan (Wahlberg), or Sully, who makes him an offer he refuses. Sully may know Sam.

Sully tries to entice Nate by saying they could find his brother on this expedition to find Magellan’s gold. Nate eventually accepts. They use an ancient map that Nate and Sam have reveled over for years to take them to Magellan’s gold.

In order to begin their journey, they must first steal a cross-shaped key from an auction house.

It is here that the two meet Jo Braddock (Gabrielle), along with Santiago Moncada (Banderas) who are also in search of Magellan’s gold.

Sully gets a hold of the cross in less than legal ways. Nate and Sully head to Barcelona. Nate is introduced to Chloe (Ali), a pickpocket who is ambivalent about working with others – however she has the other key needed to take the three closer to the gold.

Moncada is upset he missed out on getting the cross and commits a horrible act.

Nate finds a possible clue as to the whereabouts of his brother.

Nate, Sully and Chloe open a tunnel and are the first ones to enter in 100 years.

Jo is not far behind.

The ancient tunnel does not lead where they expected it to. Chloe says she knows Sam. Chloe steals the map; is it possible she is a double agent?

Nate says he’s going to finish what he and his brother started, and he and Sully go their separate ways.

Then there is a lot of double-crossing.

Nate and Sully eventually meet back up. Nate realizes the clues to the gold might be in the postcards his brother wrote him after leaving the orphanage.

“Lost is not gone; there’s a difference – if something is lost it can always be found.”

I regret that I didn’t see this when it was in the theater, but even watching it on Netflix, it was a wild, adrenaline-fueled ride. Based on the videogame of the same name, the plot was reminiscent of a smaller-casted “Goonies”, minus Sloth.

The special effects were spectacular with breath-taking scenery. Stick around after the credits, as there is hint to the possibility of a sequel. From everything I read, it looks like it is very likely to happen. Even if you can’t see the original on the big screen, this is an energetic good time.

Two pieces of Bubblicious Gum up.

Available on Netflix. <
Posted by Ed Pierce at 2:13 AM