The first thing that appears on the screen is this verse: 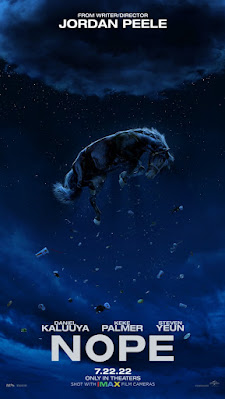 “I will pelt you with filth, I will treat you with contempt and make you a spectacle.” – Nahum 3:6

Shrouded in a bit of secrecy until it’s release, writer/director Jordan Peele’s “Nope” is the story of the Haywood Hollywood Horse Trainers, the only African American-owned horse trainers in Hollywood and some weird occurrences that happen at their ranch.

After watching the first 30 or so minutes of this movie, I drew a conclusion that I’m still not sure is correct. While the ending left me a little confused, this is still a very good, sometimes very startling movie.

Did you know the first assembly of photographs to create a motion picture was a two second clip of an African American man on a horse? And that man was Emerald Haywood’s great, great, great grandfather.

OJ (Kaluuya) is out on the ranch with his dad (David) and all of a sudden, objects begin rapidly falling from the sky and kill OJ’s dad.

After a missed opportunity to feature a horse in a movie, OJ and his sister, Emerald (Palmer), meet with Ricky Park (Yeun) who owns an amusement park called Jupiter’s Claim. Park was a child actor on a 1990s sitcom called “Gordie’s Home” where a chimp infamously went on a 6 minute, 13 second killing spree.

Back at the ranch, OJ sees lights flickering and a screeching sound that makes a horse escape its pen. There is something in the sky.

Emerald and OJ are concerned so they buy several outdoor cameras to monitor the sky. They meet Angel (Perea), a somewhat arrogant tech installer and a bit of a conspiracy theorist.

After OJ sees something in the sky again, he contacts a Hollywood producer, Antlers Holst (Wincott) about the possibly of making a documentary.

OJ and Emerald promise the impossible.

In a nightly show Park does at Jupiter’s Claim, he professes to have seen a flying saucer every night at 6:13 p.m. Park calls them “The Viewers.” Some weird stuff happens and results in several disappearances.

Another event in which many things are zooming from the sky to the Earth and this time it’s a little gorier. Emerald, OJ and Angel must run for their lives.

“Nope” is somewhat allusive in plot. So much so that three quarters of the way through the first time I saw it, a thunderstorm knocked out the power in the theater and the movie stopped very abruptly in a key point and I figured this was part of the movie - until the screen never came back on.

A lot happens and I still have not put together how, or if, it all fits together. Not knowing adds to the fright. Why was that shoe standing straight up on it’s heal?

The plot moves quickly and kept me wanting to know more. I might have to see it a third time.

Side note: there is a bit of mild gore, violence as well as language in this movie.

Now playing in theaters. <
Posted by Ed Pierce at 2:06 AM