In this sixth installment to the “Jurassic Park” storyline, it is four years after the fall of the Isla Nubar. Dinosaurs and man now co-exist. 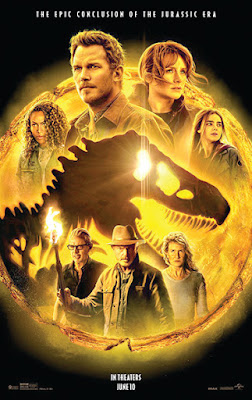 Biosyn Genetics are dedicated to using dinosaurs to teach us more about the human race. They have a dinosaur sanctuary in Italy’s Dolomite Mountains.

Biosyn’s intentions are less than pure, and CEO Lewis Dodgson creates more trouble than solutions in this action-packed dinosaur adventure.

Claire Dearing (Howard) and Owen Grady (Pratt) live in a secluded cabin in the woods with Maisie Lockwood (Sermon), the cloned granddaughter of now deceased Benjamin Lockwood. They have been protecting her from Biosyn who wants to study her DNA.

A species of incredibly large locusts has shown up in a field and are threatening the human food supply. Paleobotanist Ellie Sattler (Dern) suspects Biosyn is the cause of this, but she needs evidence to prove it. She recruits paleontologist Dr. Alan Grant (Neill).

The two of them travel to Biosyn where they meet CEO Lewis Dodgson (Scott) and are reunited with chaos theorist Ian Malcolm (Goldblum).

Despite working for Biosyn, Malcolm is helping Sattler and Grant get the proof they need about the locusts. Things don’t go their way in trying to get that proof.

In the meantime, Lockwood is kidnapped along with Grady’s velociraptor Blue’s child, named Beta.

Malcolm says the Doomsday Clock might be out of time.

Dr. Henry Wu (Wong) warns Dodgson that the locusts are a problem that will only get worse.

Dr. Wu would like to study Lockwood so he can fix a terrible mistake he made.

On their way to find Lockwood and Beta, Grady and Dearing discover an underground dinosaur black market.

Here there is a very action-packed scene that might have you on the edge-of-your-seat where Grady is on a dirt bike chased by several dinosaurs.

Dearing meets pilot Kayla Watts (Wise) who agrees to fly her and Grady to Biosyn. They don’t make it there on a direct flight.

Once Dodgson learns of the breach with Grant and Sattler, he fires Malcolm.

Dodgson burns the locusts to destroy the evidence. More than just the locusts catch fire.

Everyone heads underground. Can they escape?

This is a fun conclusion to the “Jurassic Park” storyline. I found it to be visually impressive with a lot of great dinosaur battle scenes and interaction between human and gigantic beast.

The movie is a bit on the longer side, but I thought it was relatively well-paced. Plus, there was enough intense action to keep me invested in the storyline. My only complaint were the giant locusts; I’m not a fan of really big bugs.

It was fun to see some of the original cast together onscreen for the first time since the first movie in 1993. See this one on the big screen.

Now playing in theaters. <
Posted by Ed Pierce at 2:16 AM