What’s the first thing that pops into your head when you hear “Chippendale?” Obviously, it’s cabinetmaker Thomas Chippendale. And maybe next those dancers who were famous for doing something, I forget what. But the third thing is probably the two crime-solving chipmunks who gained fame and (I’m assuming) fortune from their hit TV show “Rescue Rangers.” 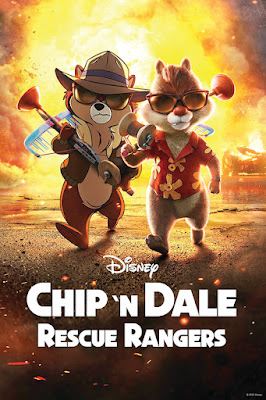 The year is 1982. Chipmunk Dale (Sandberg) is starting a new school in the middle of the third grade and he’s having trouble making friends. All that changes when he meets Chip (Mulaney) and they become inseparable.

Now it is 1990 and the two have just wrapped season three of their popular show “Rescue Rangers.” Everything is going well until Dale tells Chip he’s going to try for his own TV show. Chip expresses concern and says it could put their show in jeopardy. Dale tells Chip he’s done being second banana. Both shows are later canceled.

In present day, Chip is an insurance salesmunk. He gets a message on his landline from co-star Monterey Jack (Bana) telling him he needs help.

Monty tells Chip he owes money to the Valley Gang, or he is in danger of being bootlegged.

Monty also called Dale who has now had CGI surgery which has improved his career. Chip is not happy to see Dale. Dale tells Chip there’s talk of a “Rescue Rangers” reboot; he saw a Facebook fan page about it – and they don’t just give those away.

Chip doesn’t really want anything to do with Dale.

Monty gets kidnapped, and Captain Putty (Simmons) says it’s pretty much hopeless to find him. Chip and Dale put their differences aside and along with police officer and superfan Ellie Steckler (Layne) agree to find Monty.

They go undercover to locate Sweet Pete (Arnett), who runs the entire operation.

The two get in some trouble but must find their friend before it’s too late.

I wouldn’t normally review two kid-oriented movies back-to-back, but this is an exception.

I grew up watching “Rescue Rangers” and in the first 10 minutes of this movie I was brought back with a flood of memories from those days.

Smartly written and funny, this nostalgia-oriented “comeback” is slightly more geared toward adults who may have watched the “Rescue Rangers” growing up. That is not to say kids wouldn’t enjoy it; they would.

It is chock full of references and appearances from a variety of characters from the 1980s and 1990s; from Skeletor to Roger Rabbit to Lumiere.

Simply put, this is a fun movie. The characters have a tongue-in-cheek style humor, and it is pretty action-packed.

This is one for the entire family, whether you grew up watching Chip and Dale or are introducing a new generation to their antics and friendship.

Two “Rescue Rangers” pogs up.  Stay through the credits for more fun.

Available to stream on Disney+. <