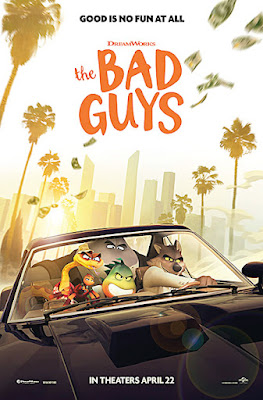 What if bad guys try to turn good? Or at least attempted to? Meet Wolf, Snake, Shark, Tarantula and Piranha; they’ve been successfully pulling heists all over the city for a while and have a room full of stolen goods and cash to prove it. These are the cards they’ve been dealt, so they may as well play them. As Wolf tells the camera in the beginning,

After the gang of Wolf (Rockwell), Snake (Maron), Tarantula (Awkwafina), Piranha (Ramos) and Shark (Robinson) have pulled off another heist, they are celebrating in their home adorned with the many valuables they’ve stolen over the years. They appear on the news and get excited because their handywork has drawn attention.

However, their excitement drops as Governor Foxington (Beetz) says the group is unoriginal and on the decline.

Wolf wants to show her who’s on the decline by stealing the Golden Dolphin Award to be given to Professor Marmalade (Ayoade) for being an upstanding citizen.

When they try to steal the Golden Dolphin, it doesn’t go the way they want.

Police Chief Luggins (Borstein) declares it the end of the bad guys – until Professor Marmalade steps in and says they deserve a second chance.

He says he will turn them into the good guys.

Wolf goes along with this only in theory. He tells the others they should only pretend to want to turn good.

After the group goes on a heist for good to save animals from being tested on, Wolf is thanked by Governor Foxington and tells him a Wolf and Fox aren’t so different.

Is it possible Wolf really wants to turn good? What would it be if the world loved them instead of hated them?

The group plans another heist to steal a valuable meteor at Professor Marmalade’s gala, but this one also gets a little sidelined. And it looks like they’ve been framed.

After meeting the Queen of Cons, the Crimson Paw, the group turns on each other and some go their separate ways. However, that’s not the end of the story.

The way Wolf, Snake, Shark, Tarantula and Piranha worked together with each member helping to commit their part of the crime reminded me of the TV show “Leverage.”

“The Bad Guys” is fun for kids and adults. It’s action-packed, has a great soundtrack with nice messages about friendship and going from bad to good. I thought it was funny for those of any age, though not a lot of adult humor that might go over younger viewers heads. The action is solid without being overly violent and not gory or bloody.

Make sure to stick around through the credits.

Now playing in theaters and available to rent. <