Movie Review: Netflix’s ‘Windfall’ thriller turns out to not have a lot going for it 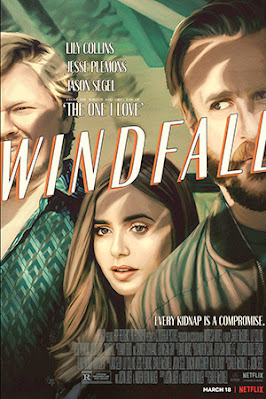 This movie is billed as a thriller, crime-drama, but I found very little thrilling about it. This original Netflix movie stars Jessie Plemons, Jason Segal, Lily Collins and Omar Leyva.

The character’s identities are so unimportant that the characters don’t have names. I think the real issue here is why does this guy, cast as “Nobody” (Segal) need this money and what are his extenuating circumstances?

CEO (Plemons) does not hold back in showing that he cares more for himself and maybe “Wife” (Collins), than others.

A lot of this movie is the three waiting for the money. And in this time CEO makes it abundantly clear he does not care about Segal’s character, referring to him as Nobody.

Once CEO and Wife catch Nobody, the couple is locked in the sauna of their vacation home in the middle of the desert.

As Nobody is trying to leave, he notices a camera hidden in a tree and returns angry to the home to get the footage. When this does not go his way, tensions only escalate.

The couple has escaped from the sauna, and it is at this point that CEO and Nobody negotiate the $500 thousand deal. While Nobody waits for the money, CEO tries to figure out why Nobody is doing what he is doing through a series of questions which only aggravate Nobody.

In the minimal interactions between Wife and Nobody, it becomes clear that she is not as happy as one might initially think.

At one point “Gardener” (Leyva) stops by and after CEO makes a plea for help, Gardener is also held hostage.

After an event with the Gardener happens, Nobody tells CEO that he did want to take his money to see what it felt like to be him. He also tells him that nothing feels fair. CEO has everything, and Nobody has nothing. This is as close as you come to finding out why Segal’s character is robbing the CEO.

I believe this statement relates to a class struggle and a rich versus poor characteristic. While the movie did move itself along in a somewhat quick fashion, when you get to the end, the payout is underwhelming.

I did not see the final moments coming, but when I did I thought they were mediocre at best. To be fair, I not sure how I wanted it to end, but the way it did end left me disappointed.

Sorry Marshall Eriksen, but I recommend audiences sit this one out.