Movie Review: ‘Safety’ shows benefits of will, determination and family

In 2006, Ramon "Ray Ray" McElrathbey was a freshman at Clemson University on scholarship as a special teams football player. McElrathbey was working overtime to stay on the team and keep up with his classes. Everything changed for him when his mother went into a drug treatment facility and McElrathbey chose to take care of his younger brother, Fahmarr. 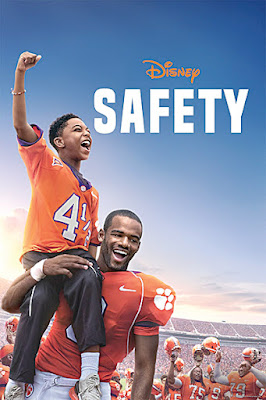 After some time, it became very difficult and McElrathbey needed help. He was afraid of losing his scholarship if his coaches found out his little brother was living with him on campus.

Can McElrathbey make it all work?

Disney+’s “Safety” is an inspirational story – based on a true story – about Ray McElrathbey and the hardships he endured and determination he put forth for his family and his team. “Safety” stars Jay Reeves, Corinne Fox, Thaddeus J. Mixson, Matthew Glave, James Badge Dale, Amanda Warren, Hunter Sansone and Isaac Bell.

“What does sacrifice mean to you?”

A question Coach Bowen (Glave) asks his team early on. Bowen goes on to explain that scholarships are earned and if you are here, you need to perform on the field and in the classroom. You need to give 110 percent.

That’s exactly what McElrathbey (Reeves) does on his arrival to Clemson. He is taking 18 credits which is a lot for  anyone, not just a freshman, a professor points out. Ray meets Kaycee (Fox), a sports reporter and they soon start spending time together.

Ray is just making everything work when he gets a call from his brother Fahmarr (Mixson) that their mother (Warren) is in a drug treatment facility. Unless there is someone to care for Fahmarr, he will be placed in foster care. At the time, their mother was only supposed to be in the facility for 30 days, so Ray said Fahmarr could stay with him at his dorm.

Ray quickly realizes he can’t keep this going. He’s found out by his coaches, and they do find a way to help Ray and Fahmarr. However, it gets noticed that Ray and Fahmarr accept occasional help, like rides from coach’s wives or additional assistance from members of the community. This teeters on what the National Collegiate Athletic Association allows for those individuals on scholarship.

Ray needs to make an appeal to the NCAA to make an exception so he can receive additional assistance and remain on scholarship. Ray must choose between football and family. Can he have both?

This is an incredibly uplifting story. Ray McElrathbey is the definition of hard work and persistence. “Safety” is emotional, sweet, funny and displays the meaning of family - biological or not. It’s very easy to forget it’s okay to ask for help. It’s hard and not always comfortable. But everybody needs it sometime and the community that came together for Ray and Fahmarr are amazing. This is a great movie.