Movie Review: What to watch as the new year approaches

2022 is mere hours away, and as you wait for the ball to drop you may be looking for a movie (or two) to pass the time. Here is an earlier favorite plus a couple others to close out 2021. 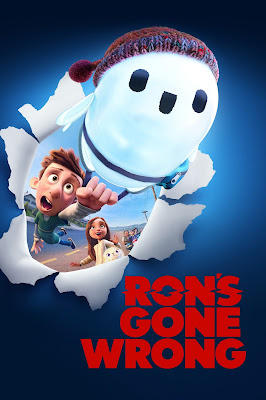 I regret waiting so long to watch this; it’s a great western. When Nat Love (Johnathan Majors) was young, Rufus Buck (Idris Elba) killed his family. Now, years later, Buck is out for revenge. This movie grabs your attention from the start and offers a few surprises. When Rufus is released from prison, Nat Love rounds up a crew to go after Rufus. This movie has a great soundtrack and solid action. It is fairly violent with rough language – they are cowboys. Starring Zazie Beetz, RJ Cyler, Regina King, DeWanda Wise and LaKeith Stanfield; two six-shooters up. Available on Netflix.

Marc Wydell (Justice Smith) has created an algorithm for friendship with the world’s first Bubble Bot – your best friend out of the box. A B*Bot helps kids connect through social media; and everyone at Nonsuch Middle School has one, except Barney (Jack Dylan Grazer). Barney has trouble making friends and his dad (Ed Helms) is concerned. When Barney finally gets a B*Bot, Ron (Zach Galifianakis), it’s a little defective. Barney goes to return Ron but realizes he might not be as defective as originally thought. However, the Bubble company is aware of this defective bot and wants it back. This is a nice movie about friendship with lessons about the importance of not being glued to our devices. “Ron’s Gone Wrong” is an uplifting story to take you into the new year starring Olivia Coleman, Rob Delaney, Kylie Cantrall and Ricardo Hurtado. Two robot shaped beanies up. Available on Disney+

Connie (Kristen Bell) and her friend JoJo (Kirby Howell-Baptiste) love couponing. They are always looking for new ways to save and make money. When Connie complains to a manufacturer about a stale box of Wheaties, she receives a coupon for a free box – which gives her an idea. An idea where she and JoJo sell coupons and make a boatload of cash. However, their efforts do not go unnoticed. Ken (Paul Walter Hauser) and Simon (Vince Vaughn) are tailing them. And aside from that, things spiral a little more for Connie and JoJo. Based on actual events. A funny, feel-good crime drama starring Lidia Porto, Joel McHale and Bebe Rexha. Two coupons up. Available on Paramount+, Showtime and to rent.

American Football coach Ted Lasso (Jason Sudeikis) takes his knowledge of European soccer – which is nothing – to manage AFC Richmond, an English soccer team that could use a little help. The owner of the league Rebecca (Hannah Waddingham) hired Lasso to make the team worse in hopes of seeking revenge against her cheating ex-husband. However, Lasso and his assistant coach, Coach Beard (Brendan Hunt), might change her mind. “Ted Lasso” stars Phil Dunster, Brett Goldstein, Juno Temple and Nick Mohammed. An all-around winner. It is only available on Apple TV+, but I promise, “Ted Lasso” is well worth $4.99 a month. Two biscuits up. <