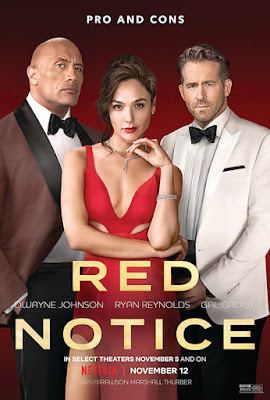 In the movie Red Notice’s prologue, we learn there were three bejeweled eggs that Marc Antony gave to Cleopatra before their wedding. Two of those eggs were recovered outside of Cairo with the third only rumored to be in existence. No one has ever found it or is 100 percent sure it exists.

In Rome, one of the eggs is on display in the famous Castel Sant’Angelo Museum. There is word that someone may have already stolen the egg, despite it being on display in front of a large crowd. John Hartley proves this to be true. He and Inspector Das order the room be sealed off, but Hartley notices a man hurriedly escape through the closing doors as alarms blare from all over.

Nolan Booth (Reynolds) is doing his best to try and escape from Hartley (Johnson) and Das (Arya). Booth claims he’s quite an art thief and will later say it usually works out pretty well for him.

56 hours later, we are in Bali, Indonesia and Booth returns home only to find Hartley waiting for him. Hartley says he works for the International Criminal Police Organization (Interpol). He’s been following Booth who is wanted in several countries.

A Red Notice is the highest level of arrest warrant issued by Interpol, reserved for the world’s most wanted criminals.

Hartley takes the stolen Cleopatra egg, puts it in a police van opposite the van Booth was loaded into and drives off.

Things don’t exactly go the way Hartley would have wanted. He finds himself in Russia with the most annoying – and familiar – cellmate.

Here, they meet The Bishop (Gadot), the best art thief in the world. The Bishop informs Hartley he has been framed.

Hartley and Booth devise a plan to take down The Bishop by crashing a party where they can steal the second known egg. Hartley wants to clear his name by arresting The Bishop and Booth just wants to become the No. 1 art thief again.

The second egg is in the possession of an international arms dealer Sotto Voce (Diamantopoulos). Hartley and Booth plan to crash an exclusive party Voce is throwing.

From here on out, so many crazy things happen. It’s a lot of fun and might keep you guessing about who works for whom.

When I saw the cast to this movie, I was pretty much sold. Gadot, Johnson, Reynolds. It’s a winning combination. This movie grabs your attention from second one and kept me interested until the very end. It has some unbelievably ridiculous stunts that are fun on the big or small screen. Reynolds has a Deadpool-esque demeanor, and he and Johnson are a very funny pair. Gadot’s performance as the ... well I better stop there, but suffice to say, she kicks butt.

Playing in select theaters and streaming on Netflix. <