Movie Review: ‘Relic’ could leave you with questions

Right off the bat, let me say this is a slow burn. It’s a burn that you might think fizzles a little toward the end. The ending did catch my attention, but ultimately left me with questions. Don’t let the pace of this movie discourage you from watching it; it’s pretty good. 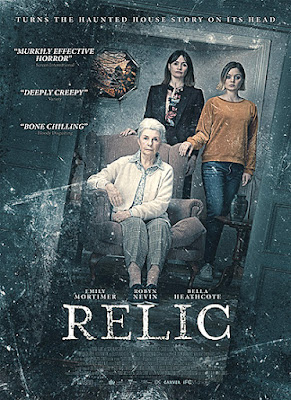 When Kay finds out that her mother, Edna hasn’t been seen in a few days, she becomes worried. Kay and her daughter Sam look everywhere they think she could be. In searching for Edna, Kay and Sam discover that there might be more going on at Edna’s home than either of them was originally aware.

Kay and Sam notice Edna’s behavior to be erratic and there is no logical explanation for it. Has something happened to her? Or is it deeper than that? “Relic” stars Robyn Nevin, Emily Mortimer, Bella Heathcote, Steve Rodgers, Chris Bunton, and Catherine Glavicic.

Once it is noticed that Edna (Nevin) is missing, Kay (Mortimer) files a report with the police and goes on a hunt for her with her daughter, Sam (Heathcote). Once found, they realize Edna’s isn’t who she used to be. She stares off in one direction at times, seemingly absent from the actual world or makes cruel comments that come from nowhere.

At one point, Edna turns to Kay and tells her “It’s here.” She then asks Kay to look under her bed to make sure there is nothing there. Edna says she’ll lose everything at one point and is seen with black marks, possibly bruises, on her body.

You see shadows at various points in the movie, in the distance or under a doorframe. Edna hugs Kay part way through and there is blood around Edna’s fingernails.

Sam goes exploring in a series of rooms behind the walls of Edna’s house and finds Post-It notes with various reminders concerning Edna and her life. One of the Post-Its says ‘my name is Edna.’ When Sam gets lost exploring back rooms at Edna’s home, she comes to a harsh realization.

Kay notices the continuing black marks on Edna’s body and black in her blood as well. What does this mean for Edna and the family? Is there someone or something attacking Edna?

Like I said in the beginning, this is a slow burn. It did keep me engaged through Edna’s strange behavior. While the end isn’t the best I’ve ever seen, it’s decent. It may surprise you.

This movie will not have you jumping out of your seat in fright, but there are parts that might make you gasp. Pay attention to the backgrounds. The sharp and biting musical accompaniment can sometimes build to an unforeseen event, but sometimes it can be nothing. You’ll have to watch to find out. I’d say this is worth a viewing. One thumb up.

You can purchase this movie where available or watch on Showtime.  <