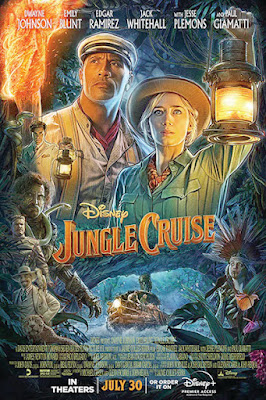 This movie has everything: action, adventure, a bit of romance, more action, legends, curses, and it’s a lot of fun. Dr. Lily Houghton (Emily Blunt), her brother, MacGregor (Jack Whitehall) and skipper Frank Wolff (Dwayne Johnson) go on an expedition in search of the Tears of the Moon, a tree with healing powers more important than originally presented. I really enjoyed this fun and funny movie the whole family can get on board for.

While you can rent this movie, seeing it in the theater gives it an effect your television just can’t provide. This action-packed comedy is best seen on the big, big screen.

Based on the ride at Walt Disney World, “Jungle Cruise” is currently in theaters and available on Disney+ and stars Dwayne Johnson, Emily Blunt, Jack Whitehall, Edgar Ramirez, Jesse Plemons and Paul Giamatti.

The Spanish conquistador, Aguirre (Ramierez) has been searching for the Tears of the Moon in order to cure his daughter, who was very sick in the 1500s. History says he failed; legend tells more. He was found by guardians and nursed back to life. Aguirre demanded the guardians give him the lifesaving arrowhead that would lead to the Tears of the Moon. However, legend says he was cursed and trapped.

It’s now 1916. Adventure-seeking Dr. Lily Houghton is in search of the Tears of the Moon which has petals that will benefit the scientific community. Her brother who’s less enthusiastic about adventure, MacGregor, is along for the ride. They prepare to go on an expedition in the Amazon where they will meet a dad-joke telling, somewhat shifty character and skipper, Frank, who will help them to look for the legendary Tears of the Moon.

MacGregor and Dr. Lily travel to Brazil where Dr. Lily shows Frank a map leading to the Tears of the Moon.

After a bit of arguing and a few close calls, one of which was dodging a torpedo, the three begin the journey.

Meanwhile, wealthy German aristocrat Prince Joachim (Plemons) is also looking for the arrowhead which would lead him to the Tears of the Moon. He wants it in order to help the Germans win World War I.  In his search he summons conquistador Aguirre.

After Lily finds a bunch of maps in Frank’s chambers and realizes Frank might also be searching for the Tears of the Moon, despite his insistence he has given up trying, the three are attacked by headhunters. Their search might be over.

During a fight with Aguirre, Frank gets stabbed – and this is just beginning of the story.

This is definitely a movie the whole family can watch. It has amazing special effects.

The chemistry between Johnson and Blunt is immediate. She tells him at one point “you are a lot of things that I don’t really care for” but goes on the expedition anyway.

The many hijinks and comedy this movie provided had me smiling ear to ear. The bad ‘dad jokes’ were one of my favorite parts. If you’re looking for more fun after you watch the movie, check out some of the post-movie interviews Johnson and Blunt did on YouTube; they’re very funny.

I enjoyed this adventure. This is a movie to be watched over and over again.