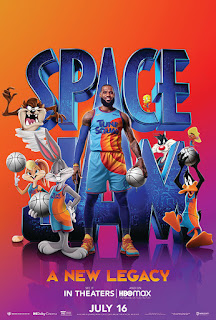 In 1996, the Tune Squad went head-to-head against the MonStars with the help of Michael Jordan, to give his friends their talents back. Now, twenty-five years later, the Tune Squad is back with the help of LeBron James. They hit the court against the Goon Squad to save James’ son from being trapped in the Warner Brothers Serververse and to save the Tunes from being deleted.

This version contains many elements of its predecessor, but while funny in some spots, doesn’t pack the same punch as the original. This movie is available in theaters and streaming on HBO Max starring LeBron James, Don Cheadle, Cedric Joe, Sonequa Martin-Green, Sue Bird, Anthony Davis, Draymond Green, Damian Lillard, Klay Thompson and Nneka Ogwumike.

We begin in 1998 in Akron, Ohio where a young James plays in a school basketball game. Afterwards, his coach tells him you cannot be great without putting in the work. Fast forward to James passing on that same lesson on to his kids. One of his sons, Dom (Joe) isn’t that interested in basketball. He’s more interested in videogames and even designed one of his own.

After a meeting with some Warner Brothers executives, James and Dom get trapped in the Warner Brothers Serververse by Al G. Rhythm (Cheadle). Rhythm sends James to the Tune World after making a deal with James that if he wins a basketball game, he and his son can leave the Serververse. If he loses, his son has to stay. Rhythm takes Dom and gives James 24 hours to assemble a team who are the Looney Tunes squad.

No disrespect to King James, but for large parts of the movie I was waiting for Michael Jordan to step in. There’s even a scene referencing that happening. A lot of the jokes, like anvils, fake tunnels, and dynamite, are very similar to what you would see in a Looney Tunes cartoon, or even in the first “Space Jam.”

I did like the game that took place in the Warner Brothers serververse, which was a multiverse featuring characters from a variety of Warner Brothers movies and television shows crowded around to watch the game. I spotted Gremlins, King Kong, Flintstones and “Game of Thrones” characters, just to name a few. I wish more of them could have interacted with the Tune Squad.

I had little to no expectations going into this and thought Lebron James was a good choice for a sequel. I did not think this was as good as the first. I think overall this was an okay movie with funny lines and lots of callbacks to the first one. To its credit, it does have a nice lesson of the importance of family and doing what you like, instead of trying to please others. There were some very cool special effects as well as one of my favorite things, cameos. I liked Don Cheadle as the bad guy; he did a great job. I would recommend you watch Jordan’s “Space Jam” in addition to this one. One basketball up.  <

Movie Review: ‘All Joking Aside’ better than expected 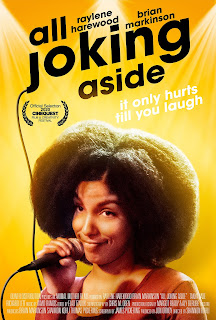 When I decided to review this movie, I thought it was going to focus more on comedy than it turned out to. About a third of the way through I realized this wasn’t just about jokes and becoming a stand-up comedian. It is about comedy, but there are layers. It’s also about pursuing your dreams, friendship along with a few deeper subjects like sexism. It’s very good; I wouldn’t say it’s laugh-out-loud-funny, but it is funny in places.

Charlene (Harewood), or Charlie as she likes to go by, is an aspiring stand-up comedian. Her very first time going on stage she is heckled by Bob (Markinson) who used to be a comedian but hasn’t performed in a while. Charlie doesn’t want to give up and goes to Bob for help. Bob isn’t the nicest of guys in the beginning and refuses to help her.

Charlie will not take ‘no’ for an answer. She continues to ask him until he finally agrees to help – for $250 a week. I thought the advice Bob gives Charlie was actually helpful. He encourages her to write and write, find the funny in the mundane and signs her up for several open mics as well as a comedy contest. There are a few problems that come up for both Bob and Charlie along the way.

As a fan of comedy, I found the advice given to Charlie to be similar to what I’ve heard other comedians give when you’re just starting out. If you want to be a comedian, you have to just do it. At one point, Charlie is talking with Bob about how she struggled on stage when another comedian talked about everything she had planned to talk about.

Bob tells her that writing is rewriting, and it may take 100 gigs to get the bit right, but that’s okay. Aside from the stand-up comedian parts of this movie, it also deals with more serious issues like health concerns and family problems. Bob is a real jerk at first who makes it pretty clear he only cares about himself, but after he and Charlie work together, that changes.

The two, though different, found common ground over a shared love of comedy. I felt like it was acted very well. There’s good character development.

This movie shows that if you work hard enough, you can accomplish your goals. It’s also okay to ask for help – even from an unlikely source of information; you never know what may develop. There’s a bit of sexism toward Charlie. A couple male comics tease her and accuse her of riding their coattails. Despite all this, Charlie moves forward and continues to pursue her dream.

I liked this movie. It’s heartfelt. Comedy is obviously a focal point, but there’s so the relationship between Bob and Charlie as well as some of the issues surrounding both of them like family problems, death, and their health.

One is King of the Monsters; the other is King of the Apes. What would happen if the two met? Could the world handle it? I wanted to see this movie for one reason and one reason alone: the fight scenes. In previous Kong movies, the King battled dinosaurs which was quite a special effects sight for the eyes. 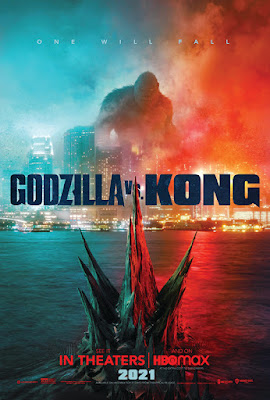 In “Godzilla vs. Kong,” the special effects are detailed and incredible. There are several scenes where the two fight each other and I was not disappointed by their battle. The movie is available through streaming services and stars Alexander Skarsgard, Millie Bobbie Brown, Rebecca Hall, Eliza Gonzalez, Kaylee Hottle, Julian Dennison, Brian Tyree Henry, and Demian Bichir.

These two behemoths each have movie franchises that have been around for a while. Godzilla and Kong have even met before in the early 1960s. When I saw the two were meeting again in a modern-day movie, I was interested. It was kind of like seeing two heavyweight boxers go head-to-head in the ring, except this time the boxers are monsters, and they are each hundreds of feet tall. At one point Kong punches Godzilla and the monster hurdles through the water. Kong then leaps from a barge into the water. As the barge explodes, the beast and monster resume their battle. This is a fun movie.

Kong is somewhere on Skull Island where he is being contained. A deaf little girl, Jia (Hottle) is the only one with whom Kong will communicate. After Godzilla attacks technology company Apex Cybernetics, CEO Walter Simmons (Bichir) asks Dr. Nathan Lind (Skarsgard) to help figure out why Godzilla attacked. Kong is brought from Skull Island on a barge with Dr. Andrews (Hall), who has been looking after Kong. Lind tells Andrews they need to use Kong as an ally against Godzilla. It could save the world.

Is Apex Cybernetics hiding something? Can Godzilla be stopped? What happens to Kong?

I loved the action when these two went head-to-head. While I felt like this movie is probably meant to stand on its own, it might help if you’ve seen others – but is probably not 100 percent necessary. I don’t think I was rooting for one or the other; it was just fun to see their interactions.

I found this to be a relatively fast-paced movie. It did have a few slow spots but was well worth the rental. It had great detail in the special effects. The detail in Kong’s fur and nails almost makes you almost believe this is an actual giant ape. Godzilla has great detail in his face; when he screams or roars you see it shake. When Godzilla and Kong fight, individual pieces of glass fall from the shattered buildings they hit. These are great action sequences with a lot of explosions. It also has a soundtrack with some decent songs to accompany all the action.

An ape thumb and a monster claw up.

Available to rent on Google and Apple. <

Movie Review: ‘The Last Blockbuster’ might take you back, but that’s about it

I remember walking on the blue carpet through a sea of video tapes, trying to find the perfect one for my Friday or Saturday night. What’s a video tape? Good question. You hardly see them anymore unless you come across a stack in the basement or find a row or pile of unwanted movies at Goodwill. 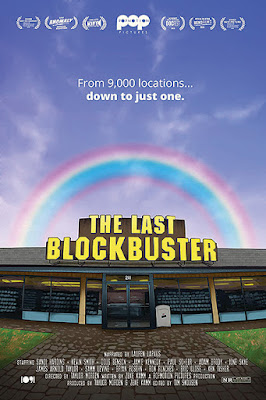 There was a day when video tapes and Blockbuster were a real treat. You’d walk around for a while looking for a movie; you’d pick up some snacks and popcorn, order pizza or takeout and you had all the ingredients for a perfect night.

In 2018, there were only four operating Blockbusters in the country. Three of them were in Alaska and one in Oregon. In 2019, the three in Alaska closed. This is an interesting documentary, that did give me some nostalgia, but I don’t think I feel the same way about the movie renting process as Kevin Smith does.

You can do everything I just mentioned without getting off the couch. Now it is almost impossible to find an open Blockbuster anywhere. Unless you live in or around Bend, Oregon where Sandi Harding, the Blockbuster Mom, has been running the last remaining Blockbuster.

“The Last Blockbuster” is a trip down memory lane. Various individuals, some involved with the company, some who just enjoyed it and one individual who really dislikes it, talk about what Blockbuster meant to them growing up. The documentary explains how Blockbuster got started, gives an overview of the store at its prime, how it began to fall apart, what finally killed it and how Harding’s store remains open. Personalities reminisce about renting movies and go on about how much they like the video store experience.

In 1985, the first Blockbuster was opened in Dallas, Texas. It offered a bigger selection and longer hours. Over time, the mom-and-pop video stores became Blockbusters. It only grew from there. Until it didn’t.

When Harding started in 2004, there were roughly 9,000 Blockbuster stores and at the height of popularity, there was one opening every 17 hours.

In 2017, Blockbusters had dwindled down to only 12 stores. As of 2020, Bend, Oregon is the only one. Harding has been recognized and interviewed about her store from every press outlet you can think of.

“The Last Blockbuster” is available on Netflix and I’m aware of the irony in that. While I liked this documentary, I don’t miss Blockbuster. At one point, someone is describing how all Blockbusters have a certain smell – not that I remember.

It did bring back some memories, but that’s it. I like being able to order a movie from my couch. I like that there are no more late fees. I felt like the reactions to these anonymous VHS tapes were pretty drawn out and exaggerated. The information about the Bend’s Blockbuster is kind of cool, but I certainly don’t need to go there. I’m only giving this one VHS tape up.