‘The Conjuring 3: The Devil Made Me Do It’ only sub-par 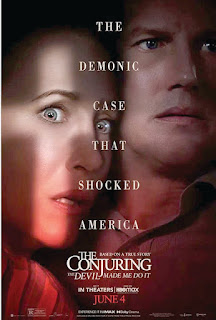 On July 18, 1981, paranormal investigators Ed and Lorraine Warren were called to document the exorcism of eight year old David Glatzel. Like the previous two “Conjuring” movies, the Warrens must investigate a paranormal disturbance within a family.

This installment is a little different from the other two in that there are murders surrounding the paranormal investigation. The exorcism of Glatzel was only the beginning and this film stars Patrick Wilson, Vera Farmiga, Ruairi O’Connor, Sarah Catherine Hook, Julian Hilliard, John Noble and Shannon Kook.

I am a big fan of the first “Conjuring” movie and rate it up there as one of the best I’ve ever seen. The second one was decent, but not as good as the first. This third chapter in the series, began strong and was okay, but soon got a little convoluted and slowed down its pace. While it did pick up a little at the very end with some information I found interesting, the movie as a whole was kind of a bust.

Eight-year-old David Glatzel (Hilliard) is possessed by a demon and Ed and Lorraine Warren (Wilson and Farmiga) are performing an exorcism to get the demon out of him. It doesn’t go so well and the demon finds his way out of Glatzel and into Arne (O’Connor), the boyfriend of David’s sister, Debbie (Hook). From there things spiral out of control and every clue Ed and Lorraine find could lead them to a way to stop this demon or it could cost them everything and be their demise.

While I did not hate this third installment, the first two movies in this series are much better, so my expectations were high going into “The Conjuring: The Devil Made Me Do It.”

This movie did not meet those expectations. In parts it resembled – or mimicked – 1973’s “The Exorcist,” but overall, the third movie of “The Conjuring” series isn’t very scary and drags a little toward the end.

The addition of a murder investigation to the plot I felt only complicated matters and I had trouble following how a particular murder that happened in another state related to the investigation and could help Arne.

To its credit, there are several good jump scares. Without giving too much away, the beginning starts with shaking tables, flying objects, demonic voices and crazy contortions. This movie also featured several moments where you could feel a quiet tension building; you’re given the impression something might happen, but you’re not sure. Sometimes it does and sometimes it doesn’t. The morgue and waterbed scenes are good examples of this.

This movie is based on a true story, which in doing a little digging, is a very interesting case. If you are a fan of any of the previous “Conjuring” movies, I’d recommend you see this third installment, but only if you liked the previous two; otherwise, I’d pass. One possessed artifact up and one flickering set of lights down.

Available in theaters and on HBO Max. <