It has been many moons since the mission began. “The Croods: A New Age” is a bit of a continuation of the first one. On their search for a place to call home, the world’s first family, the Croods, discover a more advanced family, the Bettermans. 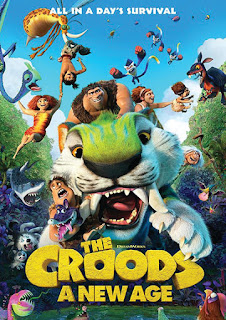 They struggle with getting along with people who think differently than they do in an environment that’s not like what they’re used to. This movie is a fun family film that has a lesson or two in it. Starring: Nicholas Cage, Catherine Keener, Emma Stone, Ryan Reynolds, Cloris Leachman, Clark Duke, Leslie Mann, Peter Dinklage, Kelly Marie Tran and Kailey Crawford.

After a long journey, Guy (Reynolds) discovers the Bettermans (Dinklage and Mann) who are more like him, than the Croods, who he has been traveling with, are. He contemplates staying with the Bettermans, despite his teenage romance with Eep (Stone). Grug (Cage) struggles with how different everything is and is not okay with staying in this new world. Along the way, they all discover they may not be as different as they appear at first glance.

When the Bettermans try to trick the Croods into thinking Guy should stay with their family instead, tensions mount and problems erupt. Will they clash and go their separate ways or find common ground?

This is a funny movie. At one point, when the Croods stay in the Betterman’s home, there is a window, which son Thunk (Duke) likes to watch. Grug yells at him saying in his day, they fought birds instead of watched them. They also feel they need to limit Thunk’s screen time, which is just a window, of varying sizes. Dawn (Tran) and Eep form a fast friendship. Eep shows Dawn a little rule-breaking may not be such a bad thing.

Overall, this movie is definitely worth watching. I liked the humor and the lessons shown through the interactions of these families. It’s a nice mix of adventure, comedy and romance. Like many animated movies, I thought this worked on a multi-level for both kids and adults. It does have a few scarier points that might be too much for younger children. While this is a sequel, I don’t think it’s necessary to see the first one to understand the second one. This awesomely voice-acted movie is a good one. Two peanut toes up!