Carol Peters (Melissa McCarthy) is an ordinary person with a relatively unexciting life. When an artificial intelligence takes over her devices and asks for her help, it wants to decide whether to save or destroy humanity. This puts Carol in a position she never wanted to be in, but both her and the superintelligence learn a thing or two in this moderately fun movie. 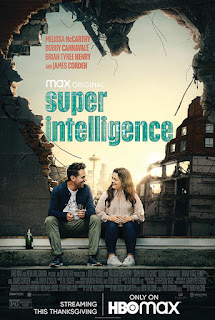 Carol is an average person. In the beginning, she goes on an unsuccessful, awkward job interview. Things don’t go her way. So, when a superintelligence (voiced by James Corden) enters the electronics in her apartment, her life gets a bit more compelling.

At first, she thinks she’s going out of her mind. She doesn’t believe the superintelligence is what it says it is. It explains it wants to observe her in order to figure out humanity. It is trying to decide if it wants to save, enslave or destroy the human race.

Carol is still, understandably, freaked out by this and goes to her friend Dennis (Brian Tyree Henry), who works at Microsoft, to let him know what’s going on. No one there believes Carol at first, but they quickly realize she is telling the truth.

The National Security Administration has become aware of the superintelligence and is working to stop it.

When the superintelligence asks Carol what’s the one thing she would most like to do, if she knew the world might end, she answers reconcile with her ex-boyfriend, George (Bobby Cannavale).

The superintelligence wants to help Carol accomplish this. It arranges for her to run into George at the supermarket. She finds out he’s leaving for Ireland in three days.

I’m lukewarm when it comes to this movie. While it is better than McCarthy’s “Thunder Force,” I can’t say I was really all that impressed by “Superintelligence.” The storyline does move along quickly and is an okay comedy that has its funny parts, along with mild action. It’s kind of a rom-com, but not really. It’s not the worst movie I’ve ever seen, but also not the best. Despite all this, it could be fun for your next movie night. Only one coffee maker up. <