What started as an innocent camping trip quickly turns into anything but relaxing in this fast-paced thriller where anyone in the town could be a suspect. Are they? I felt like this movie ran the gamut of emotions and kept me wondering and on the edge-of-my-seat until the final minutes.

Paul (Thomas Jane) and Wendy (Anne Heche) are headed for a campground in their RV with their daughter Taylor (Kk Heim, Sadie Heim). When they get there, Paul and Taylor are going to go fishing.

As soon as they arrive at the campground, Paul meets Miranda (Aleksei Archer) who is there with her husband, Eric (Kristopher Wente) in their RV. 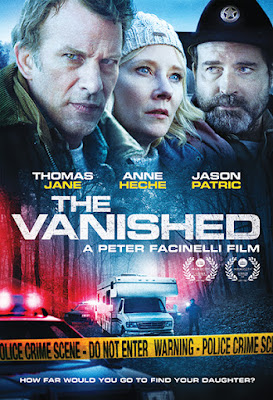 Shortly after Paul and Wendy arrive at the campground, Taylor goes missing; she was in the RV and now she isn’t. The police are called immediately in an investigation that takes a number of days. Paul and Wendy are informed that there is a prisoner on the loose. They are told to stay in their RV as the police have search parties all over looking for Taylor.

Wendy convinces Paul they need to go out and look for Taylor, despite the advice of Sheriff Baker (Jason Patric). Paul and Wendy go looking and things get more than a little off the rails.

After filing an official missing person report, they have a weird interaction with the campground’s groundskeeper, Justin (Alex Haydon). The investigation is taking a toll on all involved. Do some people know more than they are letting on?

On day three of the investigation, Paul and Wendy go out on the water with Miranda and Eric, in hopes to extract some information from them. When they get stuck on the water, accusations are made and it gets heated.

After a body turns up, Miranda disappears.

Tom (John D. Hickman) runs the convenience store on the campground and he and Justin have a conversation that made me suspicious of Tom. We learn more about Justin and the whole situation unravels further. Wendy continues to struggle.

Wendy comes across something very disturbing which could involve Taylor. It really seems like a member of the town could be involved in Taylor’s disappearance, but is that true? Where is Taylor?

This is an intense thriller with twists, turns and tense, dark moments. I found it to be a good mystery as there were many possible suspects in the town who seemed to be hiding information that may have led to Taylor’s disappearance. I was trying to figure out who the entire movie. In the end, I couldn’t figure it out. I was very surprised by the ending and it was one I found satisfying. This is a fast-paced movie that kept me engaged until the final minutes. It is worth your time, two thumbs up.