This is a fun movie for the family. Imagine there was a day where your kids made the rules and the parents had to say “yes.” There are rules and limitations, but the premise is that kids get to call the shots for 24 hours. And anything can happen.

Before their kids, Allison Torres (Jennifer Garner) and her husband Carlos Torres (Edgar Ramirez) said ‘yes’ to everything, they went on many adventures.

Fast forward to three kids later and ‘no’ has become the new ‘yes.’ Allison says ‘no’ 50 times an hour as it is all part of the job of parenting. 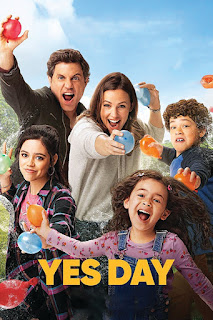 The Torres family is a typical hectic, somewhat messy family. Each parent has very different styles of parenting. Does this sound familiar? Carlos is more likely to be a little less restrictive with the kids, whereas Allison is the opposite. This is evidenced by the music they listen to when they each take their kids to school.

During a parent-teacher conference, Allison and Carlos are shown a video where their son Nando (Julian Lerner) describes Allison as a captor and dictator. Allison does not want to be known as the one who always has to drop the hammer.

Allison and Carlos are at a loss of what they should do when a coach recommends Yes Day, where for 24 hours, the kids call the shots and the parents have to say ‘yes.’

The oldest daughter, Katie (Jenna Ortega) describes her mom as a fun killer and thinks there’s no way she can go a whole day without saying “no.”

Allison agrees to a Yes Day and bets Katie that if Allison says ‘no,’ during Yes Day, she’ll let Katie go to a concert – unsupervised. If she goes the whole day saying “yes,” she’ll attend the concert with Katie.

Katie, Nando and Ellie (Everly Carganilla) make a list of five big activities for Yes Day; the final activity is a big, big one.

The activities bring the Torres family closer together.

Yes Day gets thrown a little when Carlos wants to quit. Although there are very specific rules about traveling specific distances during Yes Day, Allison allows an exception. Although the exception is very fun and very cool, a discovery on Katie’s phone derails Yes Day even more. Police become involved and things definitely don’t go as planned.

Who ended up in jail? Can the family salvage what is left of Yes Day? Was Yes Day a good idea? Who wins the bet?

Like I said before, this is a great movie I think the whole family will enjoy and maybe even relate to a little. It’s heartfelt and has a nice message of the importance of family – no matter how crazy they make you. Based on the book by Amy Krouse Rosenthal, Yes Day is a real thing families do. Maybe it’s something you and your family would try – if you dare.