In March of 1983 a massive pulse of interstellar cosmic rays struck the Earth. This triggered genetic mutations in a few individuals and gave them the ability to unleash unimaginable superpowers, making these few a new breed of human known as Miscreants. Thunder Force tells the story of two friends who join forces to try and stop these Miscreants that are destroying everything. While this movie delivers on action, it falls a little flat in pace as well as delivering comedically. 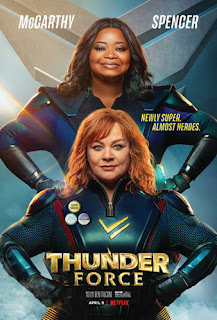 It’s 1988 and a young Emily Stanton (later played by Octavia Spencer) is getting picked on in school. Emily is super focused on finding a way to stop the Miscreants because they killed her parents.

A young Lydia Berman (later played by Melissa McCarthy) sticks up for Emily and even gives a bully a taste of his own medicine.

Lydia and Emily become friends and remain so through high school. Then they drift apart. Fast forward many years after high school to Chicago and Miscreants are still causing problems for the city. Lydia wants to see Emily again as their high school reunion is coming up. Lydia is nervous about contacting her to see if she is going. Although Emily writes back, she does not show at the reunion.

In hopes of seeing Emily and bringing her to the reunion, Lydia stops by Emily’s office and learns that Emily has made progress in figuring out how to stop the Miscreants.

However, Lydia breaches Emily’s research and has to stay at the lab. Lydia has stolen one of the superpowers Emily had worked years on.

Emily begins to receive the second superpower she has developed. Each of them now have one superpower. Soon, Thunder Force is born. They will stop Miscreants, like The Crab (Jason Bateman), a human-crab hybrid who robs a convenience store which Thunder Force stops.

The King (Bobby Cannavale) is running for mayor and is using Miscreants to help him get what he wants. One in particular, Laser (Pom Klementieff) has been wreaking havoc all over the city.

As Thunder Force gains notoriety, The King gets angrier and angrier. Lydia also finds herself attracted to The Crab.

The King has a plan to get back at those who don’t like him. Thunder Force must find a way to stop him. After a careless act by Lydia, she and Emily get in an argument and a newswoman wonders ‘are we better off without Thunder Force?’

Can Lydia and Emily stop The King and Laser before it’s too late? How will they do it? Will they remain friends?

I had higher hopes for this strong-casted movie and it did not deliver. I was expecting more comedy and it’s not that funny a movie. It is action-packed with nice special effects. It also has a decent soundtrack. It might be worth a watch, but I only give it one strip of raw chicken up. <