Hulu’s ‘Then Came You’ a romantic comedy that gets weird

Howard (Craig Ferguson) is the owner of Awd Inn in Scotland. Annabelle (Kathy Lee Gifford) is looking for ‘new everything’ as she describes it and is going to take a trip to many different countries, starting with Scotland. What follows is an ok movie that caught me a little off guard.

Annabelle is still hurting from the loss of her husband Fred, who died about a year ago. She has a box of chocolates with his ashes in them. When Howard (Ferguson) picks Annabelle (Gifford) up at that train station, they don’t get off to the best start. That quickly changes the more they get to know each other. 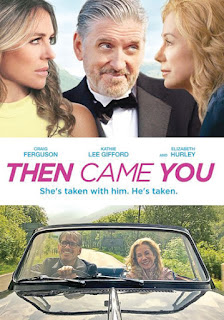 Later on, the two talk about their past loves and being stuck in a rut and settling for ‘enough.’ Both Annabelle and Howard have had tough pasts. The bond between the two continues to grow.

Annabelle is in the garden, talking to one of the only other staff members at Awd Inn, Gavin (Ford Kiernan), and he tells her there is a woman who is looking to financially take advantage of Howard. That woman is Clare (Elizabeth Hurley). Howard has a son (Calum Chisholm) who does not approve of Clare.

As it turns out, Howard and Annabelle may not have been completely honest with each other. A small fight between the two brings out the truth.

Howard and Clare have a talk. Annabelle seeks out an unexpected guest, Arlene (Phyllida Law), where Annabelle and Howard learn some new information. At this point in the movie, things took an unusual turn. That’s all I can say.

After visiting and discussing this with Arlene, Annabelle plans to continue her trip and asks Howard to drive her to the train station but not before some other weird stuff happens.  It also gets a little mushy and emotional here.

Does Howard drive her to the train station? What did the two find out from Arlene?

I was expecting something moderately funny and sappy when I sat down to watch this. I think Craig Ferguson is funny and used to watch him on “The Late Late Show with Craig Ferguson.” He has the same type of dry wit in this movie, but not the same type of humor from his late night days. I would say this movie more than exceeded my expectations as a comedy; it is very funny in spots. The romantic part of the movie is relatively predictable and pretty tame, until that meeting with Arlene. I thought I knew exactly what was going to happen and was more than surprised when a very sharp right-hand turn was taken. I still have questions. The end is kind of sweet if you can overlook that one detail. I’m on the fence about this one. One bowl of haggis down.