Movie Review: ‘I Care A Lot’ a solid exploitive crime-comedy

Marla Grayson (Rosamund Pike) is great at her job – or that’s at least what she wants you to think. She’s been pretty successful until Jennifer Peterson (Dianne Weist) came along. Loosely based on real life events, this comedy crime-thriller was better than I expected. It will keep you guessing even after you don’t think you have to guess any more.

Grayson and her business partner/girlfriend, Fran (Eiza Gonzalez) have convinced many able-bodied elderly people they are no longer able to live on their own and they must now move to an assisted living facility. Afterwards, Fran and Grayson rob them, stealing from their assets and bank accounts. 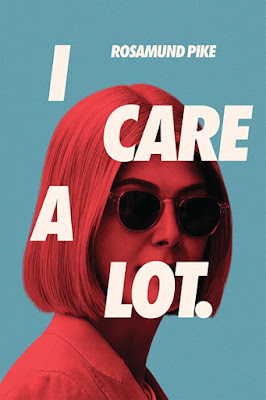 In the beginning of the movie, Grayson says, “there are two types of people in this world: lions and lambs; I am not a lamb.”

After the death of Alan Levitt at Berkshire Oaks Facility, it is recommended to Grayson that she ‘go after’ Jennifer Peterson. Why? Peterson has no family, she lives alone, and she is quite wealthy. After a doctor (Alicia Witt) falsifies some information, a judge (Isiah Whitlock Jr.) says Grayson can add Peterson to her caseload. Grayson meets Jennifer and Jennifer is quickly brought to the assisted living facility like so many others who Grayson has taken advantage of before. After Peterson is in, Grayson raids her home and sells her possessions.

Maybe Peterson isn’t as unattached as originally thought. Peterson’s lawyer (Chris Messina) stops by Grayson’s office and says he knows what she’s up to. He sort of threatens her, and then bribes her.

At this point Peterson is aware of what Grayson has done and tells her she’s the worst mistake Grayson will ever make.

There are some new developments regarding Peterson. Roman Lunyov (Peter Dinklage) is looking for her. Grayson and Fran meet Lunyov and it doesn’t go well. Several questions come up at this point about Jennifer Peterson. Grayson is aware that she may have bitten off more than she can chew. Things get a little crazy.

Have Grayson and Fran met their match? Have they finally conned the wrong person? And what about Jennifer Peterson?  And Roman Lunyov? How is he associated with Peterson?

I went into this fast-paced movie with only a peaked interest and zero expectations. I think it’s safe to say Marla Grayson and Fran are both antiheros. But not ones I was rooting for. Once the story began evolving and Marla had some opposition, I wasn’t rooting for anyone – but I really wanted to see how everything was going to play out.

Just a heads up: there is some language, violence, mild sexuality and drug use.

Also, don’t let your guard down when you think it’s okay to do so. You might be led in the wrong direction.

Two bags of diamonds way up.