Movie Review: It might be better if Hulu’s ‘Alone’ is watched with others

Have you ever felt like someone was following you? What if that someone kept reappearing as your day went on? That’s the case for Jessica (Jules Willcox) as she moves to a new home after suffering a tragedy. This action thriller had me on the edge of my seat for big chunks of the movie.

Jessica is loading up a U-Haul to move out of the home she and her late husband shared. She is about to make a long trek to a new place. In the first part of her trip, she tries to pass a slow-moving Jeep which, at the last minute, decides to speed up while a tractor-trailer truck is barreling toward her. At the last minute, she passes the Jeep, but is understandably shaken. 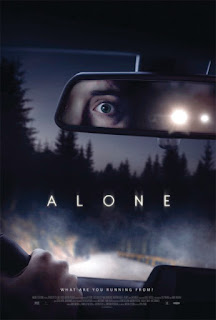 Later that night, Jessica is pumping gas and while talking on the phone to her dad, notices what could be that exact same Jeep emerge from the darkness. Luckily, it drives right by the gas station.

Jessica stops at a motel for the night. In the morning, just as she is about to leave, a man (Marc Menchaca) approaches the car and asks if she recognizes him. Jessica does not and he explains he was the guy in the Jeep who didn’t let her pass the other day. He says he was texting but apologizes. He then continues to ask her questions; he’s very interested in her and where she’s going. Jessica is reluctant to say much, and he wishes her a good trip and leaves.

Jessica is driving down a narrow road when there is a broken-down car with a driver who needs assistance. The driver is the same man (Menchaca) from before and he asks her to take him to the next gas station. Jessica refuses. He makes several more pleas before she eventually drives away.

It seems like everywhere Jessica goes, there is the Jeep. This scares her so much she calls 911. But it’s too late. She blows a tire and skids out of control into a ditch. The man approaches and before Jessica can defend herself, she is in a stone room with bars on the window.

The man and Jessica have a brief encounter.

Jessica figures out how to escape the stone room and hides in a closet until the right time where she runs into the woods. She’s barefoot and steps on a root. This was a very cringe-worthy scene.

The man follows her, but she escapes him by making a tough decision. She runs into a hunter, Robert (Anthony Heald), who is genuinely helpful.

Can he help Jessica escape? Or does he also have bad intentions?

What happens to the man?

I love a good thriller, and this fits that bill. I was rooting for Jessica pretty much from the beginning. The end will have your heart pounding and you’ll be on the edge of your seat. This is well worth 98 minutes of your time, though maybe don’t watch it ‘alone.’ I give it two tire irons up. Available on Hulu. <