Movie Review: Hulu’s ‘The Ultimate Noise Playlist’ may surprise you

Marcus (Keean Johnson) is your typical teenager with one noticeable difference – he loves music and sounds. He loves them so much that he’s been dubbed the resident playlist doctor at his high school. He makes playlists for all types of scenarios and this forms the basis of Hulu’s “The Ultimate Noise Playlist” film.

Unfortunately, the thing that Marcus can’t get enough of is about to be taken from him. After finding out he has a brain tumor in which the operation will cost him his hearing, Marcus goes out to create a playlist of his favorite noises, like the sound of Velcro, a campfire, a chainsaw, in order to hear them one last time. 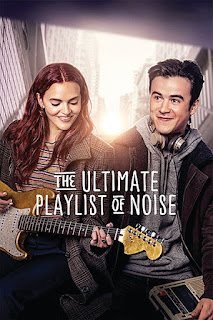 Before learning of his tumor, Marcus had suffered a loss as a young child when his older brother, Alex (Gordon Winarick), saved him from a fire but wasn’t able to make it out himself. Marcus says everything he does, he does for his older brother, who was a musician. He is very grateful to his brother and keeps him in his memory.

When he finds out he will lose his hearing because of a brain tumor, he comes up with the idea for the ultimate playlist of noise to hear his favorite noises one final time. He plans to take a road trip to New York City to visit his brother’s recording studio and maybe hear some of his brother’s old recordings.

His parents are against this road trip, but Marcus sneaks out and begins it anyway. He’s only started the trip when he accidentally hits a pedestrian, Wendy (Madeline Brewer), a musician who is running from her angry ex-boyfriend. She’s also headed to New York City.

They begin recording sounds and a friendship is quickly formed. When they eventually make it to New York City, the two go their separate ways. Marcus makes it to his brother’s recording studio. It is here that he learns of a different version of his brother’s past.

Everything begins to unravel when he runs into Wendy in New York City and some other truths come out. They part ways again. Marcus makes some bad decisions which lands him in the hospital several days prior to his surgery. After this he returns home and resumes his ‘regular’ life while he waits to have surgery.

How does the surgery go? Do Wendy and Marcus get to see each other again? What does the future hold for the two of them?

If you’ve read this far, let me say that while this is a movie about music and sounds, it is not a musical. No one breaks into song and dance here. No part of this movie dragged, and I was engaged the entire time. The relationship between Marcus and Wendy is a sweet one and their story is very heartfelt.

This is a nice movie, that although a little heavy towards the end is well worth a watch. The end might not go the way you expect, or maybe it will. I recommend this and give it two cassette tapes up. <