If you're a fan of somewhat raunchy-style movies but also enjoy the fairy tale sweet endings of Hallmark classic movies, then is this a perfect flick for you.

“Holidate,” a romantic comedy that premiered in late October on Netflix, follows the hopeless romantic Sloane (Emma Roberts) during the span of an entire year with her 'holidate,' Jackson (Luke Bracey). 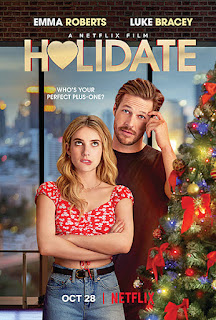 Sloane and Jackson are two 30-somethings that are tired of either having no dates or insane ones for the holidays, so they make a pact to be together for the holidays to avoid loneliness during them.

The two first meet at the returns section a day after Christmas, annoyed that they can't return their presents and end up taking it out on each other briefly while in line. The anger soon turns playful with Sloane agreeing to be Jackson's date to a New Year’s Eve party.

From New Year’s onward, the two continue being each other's holidate for every holiday possible.

Valentine’s Dayh, Easter, Cinco De Mayo, even Mother's Day, these two continue with their holidate shenanigans to Sloane's mother's dismay. She wants her daughter to stop wasting her time with someone she doesn't like and to actually go on real dates. Despite her mom, they continue going on their dates and get to know each other better in the process.

Feelings start to bloom for one another, only to have them shatter after a wedding.

Sloane's younger brother is getting married and she needs a date and, despite it not being a holiday, her sister encourages her to ask Jackson. If he wants to come, then that must mean he likes her. Meanwhile, Jackson tells his friend about the wedding and his friend warns him not to go to the wedding with her. The two end up going with different people and are jealous, and the tension continues to grow when Halloween rolls around.

Halloween morning, the two sleep together and almost immediately after, Sloane's sister barges into her apartment and she has to quickly usher Jackson out. This hurts Jackson immensely, nevertheless, he returns for their annual holidate the following month.

Thanksgiving ends with a big fight between Jackson and Sloane. They do not spend Christmas together this year, but soon see each other afterward.

Christmas comes and goes, and these two meet up at the mall just like in the beginning. Sloane tries to chase after Jackson but ends up having to go on stage where a choir is currently performing to give a heartfelt speech to him about how she loves him. Jackson returns the feelings and they share a romantic kiss then and there.

I'm not too much of a romantic movie kind of person, but I do have to give it to Holidate, it was pretty funny.

All in all, it's probably one of the best romantic comedies I've seen in a long time and I think it would be worth watching with friends during a Netflix binge-a-thon. <