VUDU’s ‘Save Yourselves’ starts strong, but ultimately fizzles

In the film “Save Yourselves” a couple, Su (Sunita Mani) and Jack (John Reynolds), are rarely off the grid. Like many, theses millennials use some sort of device several times throughout their day. When the two decide to go device-free for the week at a friend’s cabin, they picked the wrong week to do so. Is there a right week to do anything, when aliens attack?

Su and Jack attend a wedding where Jack’s friend Raph (Ben Sinclair) offers the two his cabin for a week. Su and Jack make a pact to go device-free for the week, in an effort to become more authentic. 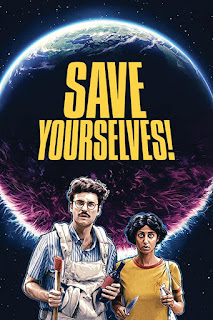 They begin their week by going on a hike where they hear gunshots in the distance and don’t give it much thought. Later that night, after Jack is unable to start a fire, they see what they think are shooting stars lighting up the night sky. Are these really shooting stars?

“The urge to take out my phone is really strong,” says Su.

One of these shooting stars hits the Earth. And there may or may not be chaos slowly happening all around them, but Su and Jack are so tuned into being authentic they do not notice.

What they do notice is a pouffe, a round hairy something, like a hairy soccer ball in the cabin. They later notice the pouffe can move.

Su and Jack trying to be authentic leads to some arguing and a truthful discussion where Jack admits he doesn’t know how to do ‘manly things,’ like gut a fish. Afterward, Su breaks their pact and checks her phone where she has many voicemails and text messages informing her that these pouffes have begun taking over. Su and Jack decide it’s time to turn their phones back on.

From the information in the texts and voicemails the two have received, these pouffes or possible aliens, are attracted to ethanol. This makes Su and Jack’s car a paperweight. The two freak out but develop a plan. They find a working car in Raph’s shed.

From here things really begin to unravel and get very strange. On their way away from the cabin, they see a pouffe kill two people. As Su and Jack are driving by, they realize this couple had a baby in their vehicle and Su and Jack decide they need to try and save him.

While saving the baby and trying to escape these pouffes, a pouffe attacks Jack.

Will he survive? Do they both escape? What is going on?

This is billed as a comedy and it is mildly funny; let me stress mildy. The first two acts are relatively strong and actually pretty good. It’s the third act where this movie lost me. It just gets too weird, with too many strange turns that didn’t seems to add to the overall plot of the story.

I rented this movie and while it wasn’t a total bust, I would save yourself from “Save Yourselves.” <