‘The Addams Family’ shows the lighter side of macabre 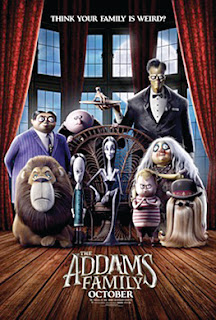 The movie begins with Morticia (Theron) and Gomez (Isaac) getting married and the entire Addamses family is at the ceremony when it is interrupted by angry townspeople calling them monsters and saying the Addams family isn’t welcome in their town. They are soon under attack.

The funny gags appear right from the start. As Morticia and Gomez try to escape, they cut the pants of the torch-carrying villagers, revealing an assortment of underwear. The two eventually escape the angry villagers.

Morticia and Gomez later meet Lurch, a servant of theirs, and the three moved into an abandoned insane asylum. 13 years later, they have two children, Wednesday (Mortez) and Pugsley (Finn Wolfhard).

We meet Wednesday as she awakens for the day, wearing her noose earrings (a nice touch), and seemingly bored of the same routine. Pugsley is playing with a rocket, when he should be practicing for his Mazurka, ‘the most important day in an Addams’ life’ his father tells him. Family members from all over will be coming to watch Pugsley. Wednesday has never left her home and is curious what is beyond the family gate. The family visits a nearby town.

Here, Uncle Fester (Nick Kroll) cracks jokes, while the movie conveys a message about conformity. The family meets Margaux Needler (Allison Janey), a home renovator who offers to give the Addams’ home a makeover. Margaux seems innocent enough at first but may have an ulterior motive. Morticia is not interested and turns her down.

Wednesday makes a friend with Margaux’s daughter Parker (Elsie Fisher). In an effort to break her perceived monotony, Wednesday goes to junior high. Meanwhile, Gomez is worried Pugsley will do poorly during his Mazurka.

Margaux leads a charge to get rid of the Addams family.

Will the Addams family be driven out of town? What happens to Wednesday? How will Pugsley do at his Mazurka?

I was never a fan of the 1960s TV show or the 1990s movies and animated series. This was a good movie though. It had a decent storyline that works for kids and adults. It had a nice message about being different told through Wednesday’s and Parker’s storyline. There are a few scary voices or what could be considered frightening scenes, but overall, I found it relatively tame. Available on Hulu or to rent.