Netflix’s ‘Enola Holmes’ a tale of empowerment and mystery

There is a mystery afoot. On the morning of her 16th birthday, Eudoria Holmes (Helena Bonham Carter) went missing. Eudoria is mother to Enola (Millie Bobby Brown). Enola’s father died when she was very young and her brothers, Mycroft (Sam Clafin) and Sherlock (Henry Cavill) (yes, that Sherlock) moved away soon after.

Her brothers have come home to help find their mother. The relationship between the three is strained. They haven’t seen each other in so long, it’s almost as if they are meeting for the first time. 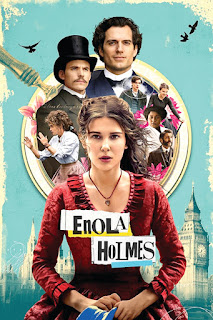 When the brothers first arrived, they seem more interested in making sure Enola is on the correct path she should be on, rather than finding their mother.

However, Enola has no interest in going to “Miss Harrison’s (Fiona Shaw) Finishing School for Young Ladies” and takes it upon herself to begin looking for her mother. She quickly realizes her mother has left her clues. The clues take her on quite a journey. While on a train to London, she meets Viscount Tewkesbury, Marquess of Basilwether (Louis Partridge) who is being chased by a man (Burn Gorman).

We later learn this man is related to Tewkesbury. Enola saves Tewkesbury from this man and the two part ways when they reach London.

When Enola arrives in London, she knows she must stay hidden from her brothers, who will be searching for her. In order to do so she must become unexpected. As she travels from place to place, spot to spot, I wondered, what has Eudoria planned? Where is she? What are her motives for doing this?

Sherlock is on Enola’s trail; though she still remains out of his grasp. Enola is now on the trail to find Tewkesbury, who is in danger. Enola finds his treehouse and meets his grandmother, who seems nice enough – at first.

Enola and Tewkesbury find each other again. She tells him she is searching for her mother.

Enola is caught by her brother Mycroft who sends her back to finishing school where she does not enjoy it. She and Sherlock discuss where their mother might be.

Tewkesbury has another run-in with that disgruntled family member and once again, needs saving.

Another family member appears claiming the future of the country is at stake. This statement is made in response to a reform vote that Tewkesbury could alter.

Where is Eudoria? What will become of Enola and Tewkesbury? Will Enola ever find her mother?

While this is a good movie, it’s slow burn. It has a central theme of making a difference and finding your own path. You have to make some noise if you want to be heard. It also has an underlying political thread.

This is a mystery with a decent amount of action. I found the end satisfying and unexpected, though the reasoning is slightly complex. It’s a fun movie I would recommend. Two sticks of dynamite up – that’s how you make the noise. <