I’ll admit I had not planned on reviewing this nine episode Netflix series, but after watching several of the episodes, it’s too good not to review, especially with Halloween coming up. This season stands alone, but with small connections, to its 2018 first season “The Haunting of Hill House.”

“The Haunting of Bly Manor” follows Dani (Victoria Pedretti) as she arrives at Bly Manor to be an au pair to children Flora (Amelie Bea Smith) and Miles (Benjamin Evan Ainsworth). While the series jumps back and forth in time, I believe a majority of it takes place in 1987. At Bly Manor there is housekeeper, Hannah Grose (T’Nia Miller), chef Owen (Rahul Kohli) and gardener Jamie (Amelia Eve). 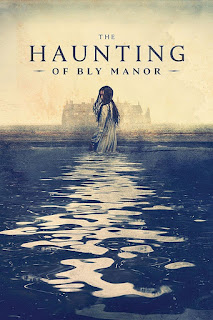 The series begins with a woman telling several guests at a wedding a ghost story. The story initially focuses on Dani and her time at the manor, but also gives a bit of backstory regarding some of the previous events that happened at the manor, how it may have affected the children and who may have been responsible. The more I watched, each episode would drop a bombshell or reveal a crazy cliffhanger that kept me wanting more.

Dani arrives at Bly Manor, from the states, and is excited to have secured a new job as an au pair. While she seems relatively carefree at first, she has a few secrets. Dani has been hired by Henry Wingrave (Henry Thomas) to care for orphaned Flora and Miles. As the series progresses, you meet Henry’s business partner Peter (Oliver Jackson-Cohen), who was involved with the previous au pair Miss Jessel (Tahirah Sharif) and could be responsible for her whereabouts ... or lack thereof.

While this is a series in the ‘horror/thriller’ category, it’s not gory; there are several jump scares along with mild language and some violence.

Each episode will have you asking questions and questioning what is real and what might not be. As you get further into the series, you’ll discover secrets, twists, turns, you’ll learn about dream hoping, they’ll be creepy children and startling revelations. There’s even a romance.

I loved this show. I was a fan of the first season, at Hill House, which I’d also recommend. This season at Bly Manor was just as good, if not better. My only complaint is the series can be hard to follow at times with several storylines and a lot going on.

Parts of the series can be a little slow, but even the slower parts are leading up to a sometimes, jaw-dropping moment, so stick with it. At the end I felt like all questions were answered and enjoyed the wedding connection. This is a series worth a watch; but maybe keep the lights on. <