The character of Hubie Dubois may be new to the screen, but in Adam Sandler’s ‘Hubie Halloween’ Sandler, who plays Hubie, brings a very familiar feel from his past movies, like “Billy Madison” and “Happy Gilmore”, to this new character’s story. Several big names, and a few surprise cameos, round out the cast of this relatively new, hilariously spooky Netflix film.

It begins with orderly Hal L. discovering someone has escaped from the psych ward in Salem, Massachusetts. 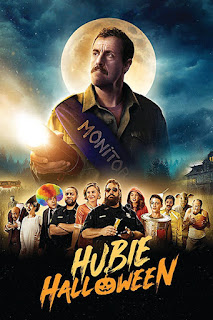 It’s the day before Halloween and Hubie (Sandler) is preparing for the big day. Hubie is a laughing stock around town. Everyone, kids included, constantly tease and are mean to him.

Hubie meets Walter Lambert (Steve Buscemi) who has moved in next door to Hubie and seems very nice, but Hubie soon notices something is off about Lambert.

Hubie lives with his mother (June Squibb) who tells him he needs to stick up for himself more. The only person who doesn’t tease him is Violet Valentine (Julie Bowen) who he has had a crush on for many years.

The big day is here – Halloween. The movie’s scenery provides a very, what I would call, classic Halloween feel. Salem is preparing for their annual parade. As daylight is fading fast, where is the escaped psych ward patient?

Every year, Hubie dubs himself the Halloween monitor and goes around monitoring the streets to make sure people are being safe.

He hears noise coming from Mr. Lambert’s home and goes to check it out, only to make an odd discovery.

While policing the streets, all of Salem teases Hubie; it’s even said that “messing with Hubie is a Salem tradition.”

Soon, some kids go missing. Then several adults. Now there is a mystery on Salem’s hands and Hubie is on the case. He even gets accused of making these people disappear.

Was Hubie responsible for the disappearances? What about the escaped psych ward patient? Will the lost people be found...alive? And what about Violet and Hubie? What does their future hold?

I am generally a fan of Sandler’s movie’s, though my two favorites, without question, are “Billy Madison” and “Happy Gilmore.” I only mention these two because this movie had a very similar comedy feel to those Sandler movies of the mid 1990s.

This movie is very slapstick, with potty humor and several call-back jokes to the above mentioned movies; can you spot the references? It does have some language and a fair amount of sexual humor in the form of several risqué t-shirts, worn by Hubie’s mom. I wasn’t a fan of the voice Sandler gave Hubie and I felt the stupidity was a little over-the-top at times, but still enjoyed this movie and would recommend it. It has great music and great cameos.

Two retractable thermoses up – or is that out? Sideways maybe? <