Can a dating website guarantee a user will find love? That’s the question to be answered by lawyer Susan Whitaker (Rachael Leigh Cook) for her client, Nick Evans (Damon Wayans Jr.) in Netflix’s ‘Love Guaranteed.’

Nick is suing the dating website ‘Love, Guaranteed’ because when he signed up, in the fine print it promised after 1,000 dates love was guaranteed. He’s documented every date and refers to them like episodes of the TV show “Friends” (the one who talked about cats, the one who brought her parents, etc.) He claims the website is profiting off lonely souls. 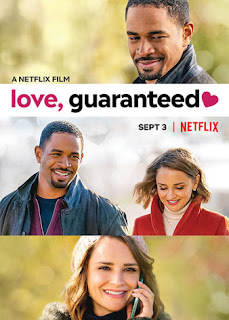 At first, Susan is skeptical of Nick and thinks he might be scamming. She calls him an opportunist.

In the beginning of the movie, it looks like Susan might be a little lonely. She lives next to her sister. Susan is a workaholic for her own law practice which is struggling financially.

She finds out that ‘Love, Guaranteed’ will be represented by Tamara Taylor (Heather Graham) who is an extremely rich mogul. Whitaker tells her staff they need an airtight case.  As she is about to prepare for the case, she admits she’s never been on a dating website and is talked into joining one - for research purposes only. She goes on no more than three dates and is exhausted. She’s also interviewing Nick’s dates to make sure he just wasn’t working his way to 1,000 dates.

As Susan and Nick begin to spend more time together, they hit it off. Early on, they both make preconceived judgments about one another that they later realize were hasty.

They both meet with Tamara and her group of lawyers where they turn down an offer for $100,000. At this point, Susan and Nick are getting along more and more. Susan realizes it might be a conflict of interest and will give Tamara ammunition for her defense.

Susan also speaks with Nick’s ex-fiancé, Arianna (Kandyse McClure) who will take the stand at the trial.

One of Tamara’s lawyers, Bill Jones (Jed Rees) gets wind of the time Nick and Susan have spent together and what might be happening and uses a loophole to figure out a way they can win the case. Bill Jones gives Susan and Nick one more chance to take the $100,000 deal. They turn it down again and Susan tells Nick they shouldn’t see each other.

How does the trial go? Does Nick win? What happens to him and Susan?

I would recommend this movie. It’s funny, slightly predictable in parts and has a solid ending that also features a twist I didn’t see coming. Yes, it’s pretty cheesy from time to time; not sickeningly cheesy though. Just a sprinkle of cheesiness. It only dragged a little in the middle.

If you’re looking for a ‘date night’ movie, this is it. Two Tiffany (the singer) cassette tapes stuck in a car’s cassette player up. <