If there was a pill that would give you a superpower for five minutes, would you take it? Even if the effects could be detrimental? What if you could use those powers to help people? Would you take it then? 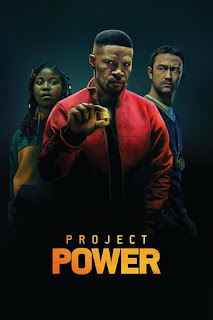 Biggie (Rodrigo Santoro) addresses a group of young ‘entrepreneurs’ and makes them an offer in the beginning of the movie. He will give them a product, a pill called Power and they sell it on the streets of New Orleans. A gentleman called Newt (Colton Baker) has some questions and says this sounds too good to be true.

Six weeks later Power is on the streets of New Orleans and teenager Robin (Dominique Fishback) is attacked by three guys who are looking for it. Detective Frank Shaver (Joseph Gordon-Levitt) shows up just at the right moment. He and Robin work together to catch guys who are trying to buy Power.

Robin has been saving the money she makes from working with Frank to help her mom (Andrene Ward-Hammond), who has diabetes.

We meet Art (Jamie Foxx), whose daughter, Tracy (Kyanna Simone Simpson) is missing, as he is walking along an apartment complex looking for Newt. Art wants to know who is supplying Power. Art breaks into Newt’s place. Newt takes Power and his body turns into fire. Art and Newt fight which leads to Art having a flashback about losing his daughter. Power is wreaking havoc on the streets of New Orleans. Biggie is also looking to expand his market.

In his search for answers about his daughter, Art kidnaps Robin. After a shootout between Art and some distributors of Power, Robin manages to escape. Despite their weird ‘meeting,’ Robin wants to help Art find his daughter, for a price.

Robin and Art find Biggie and where he is hiding. Frank catches up with Robin. Art, Biggie and Biggie’s crew have a shootout. Frank helps Art escape and arrests him. As Frank brings Art in, Robin follows them. Frank realizes he and Art have similar goals. They all head to a tanker where Biggie is planning to leave that night for a new city. Robin, Art and Frank all end up on the tanker. Later Robin finds Tracy.

Will Tracy see her dad again?  Can they stop Biggie? Will they all make it off alive?

I thought this was an interesting concept, though it’s a bit of a knockoff of 2011’s ‘Limitless’ where a pill enables the user to have 100 percent of their brain’s abilities. Instead of brain abilities, Power offers the user superpowers, like invisibility, becoming fire, super speed, super strength, the ability to become gigantic or it can also cause death. Some scenes are gruesome and bloody. There is a quite a bit of violence; a lot of gunfire and explosions. There is also language and drug use.

This movie had a slow start and only picked up a little as it went on. The special effects are cool. This was an action-packed movie, just not one that kept me on the edge of my seat or wondering what was going to happen next. The end left me with questions about Tracy and the fate of Biggie and his crew. It’s not a bad movie, just one that wasn’t for me. Five out of 10 explosions. <